Guyana is in the north-east of South America. It borders the North Atlantic Ocean. Its neighbours are Suriname, to the east, Brazil, to the south and south-west, and Venezuela, to the west. Guyana has a low-lying, narrow coastal belt, hilly tropical forest and high savannah uplands. Most of its people live along the coast.

The Secretariat gave Guyana a checklist tool to help it strengthen women’s involvement in political and decision-making processes.

In June 2018, the Secretaroat helped Guyana improve its reporting on human rights in the country under the United Nation’s Universal Periodic Review (UPR) process. A Commonwealth-partnered event helped Guyana build skills to report to UN treaty bodies such as the Convention on the Elimination of All Forms of Discrimination Against Women.

The Secretariat helped Guyana’s justice sector improve skills to handle cases of domestic abuse. The Commonwealth also gave training to the sector on investigating crimes related to the internet.

The Secretariat helped Guyana strengthen its system for internal auditing (checking the efficiency of systems and processes). The country then expanded audits to an additional 6 government ministries.

The Secretariat advised Guyana on improving profits from its petroleum sector and managing its oil resources sustainably. It helped the country design a sovereign wealth fund, to manage oil income for the public good and across generations. A law for this was passed in 2019.

Guyana in the Commonwealth

At the Commonwealth Heads of Government Meeting in 1989, Guyana offered to set aside about 360,000 hectares of rainforest for research. It partnered with the Commonwealth and launched the Iwokrama Rainforest Programme in 1990. The programme investigates conservation and sustainable use of forest resources and biodiversity.

Sir Shridath Ramphal of Guyana was Commonwealth Secretary-General from 1975 to 1990. 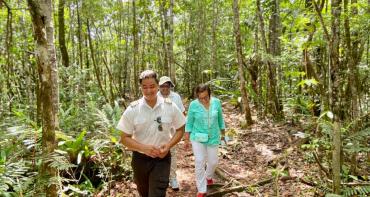 Blog: A Call to Action on Living Lands 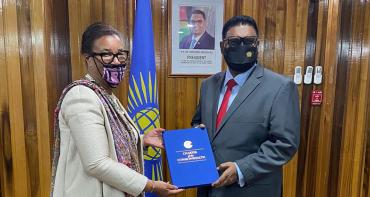