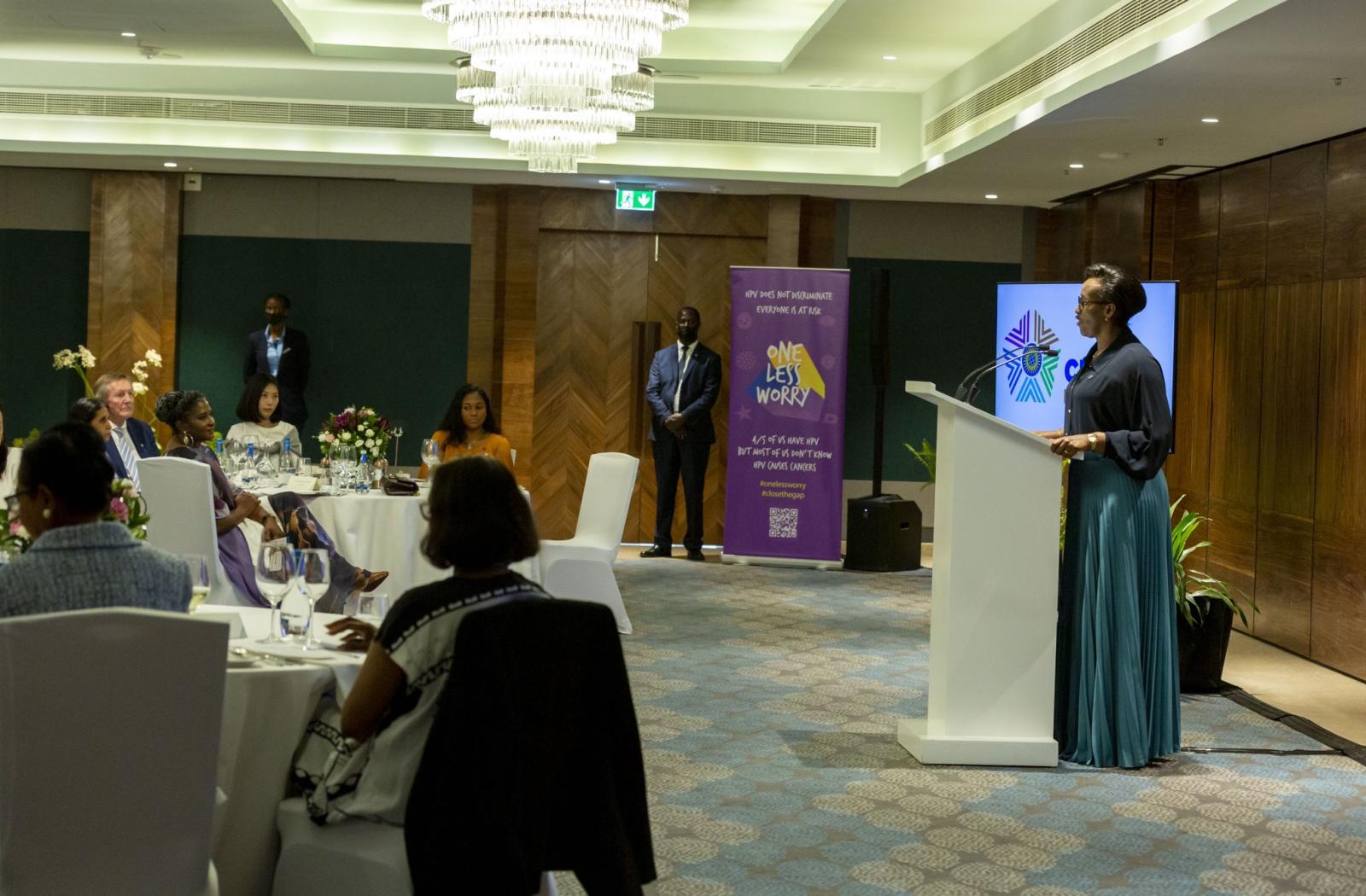 Cancer survivors were given the unique opportunity to share their journeys with spouses and partners of Commonwealth Heads of Governments and Foreign Ministers at a luncheon on cervical cancer elimination.

In her opening remarks, H.E. Mrs Kagame underscored the urgency of the global elimination effort. She said:

“Cervical cancer is a preventable biological calamity, a socio-economic threat, and an entire civilization’s moral trial, that condemns 9 out of 10 diagnosed women in low and middle-income nations, to a premature passing.”

“Regardless of the grimness of the situation, the facts are that there is hope, there is reason, there are resources, and there are solutions,” she added.

In an impassioned plea for urgent action, cancer survivor, Karen Nakawala, spoke about the devastating impact of cancer. She said: “Going through cancer impacts your life in all forms, in all sorts.

She was joined by Summer Ng, who was diagnosed with cervical cancer at 24. Ng and social innovator Cindy Chng, who recently launched the A4HPV – a task force under the Commonwealth Youth Health Network focused on advocating for action towards cervical cancer elimination - distributed cloth bags with self-sampling swabs, to demonstrate that testing of HPV can be less invasive and less uncomfortable for women when simple innovations like self-sampling are adopted.

The programme also included the launch of the Commonwealth version of the documentary, Conquering Cancer, which highlights cervical cancer elimination initiatives in various Commonwealth countries. The documentary was widely welcomed, and delegates agreed to promote it in their own countries, to increase awareness of Cervical Cancer.

“Today I remain committed to objectives laid out by our ministers of health but beyond this I remain fully committed to using my office to increase our efforts at greater awareness, to reduce the risk of women developing cervical cancer.  We cannot and will not allow women to live with the fear that they may be the next victim of this preventable life-threatening disease.”

The initiation of the Lancet Oncology/Commonwealth Secretariat Commission report on International Development Aid and Global Oncology was also launched. This report will take stock of the landscape of cancer research and cancer care for the 2.5 billion people that make up the Commonwealth and will inform policies to improve outcomes for patients with cancer within and beyond the Commonwealth

At the conclusion of the programme, delegates agreed to:

The Role of Commonwealth Youth in the Fight Against Cervical Cancer