Blog: Connecting local communities with National Parks in The Bahamas 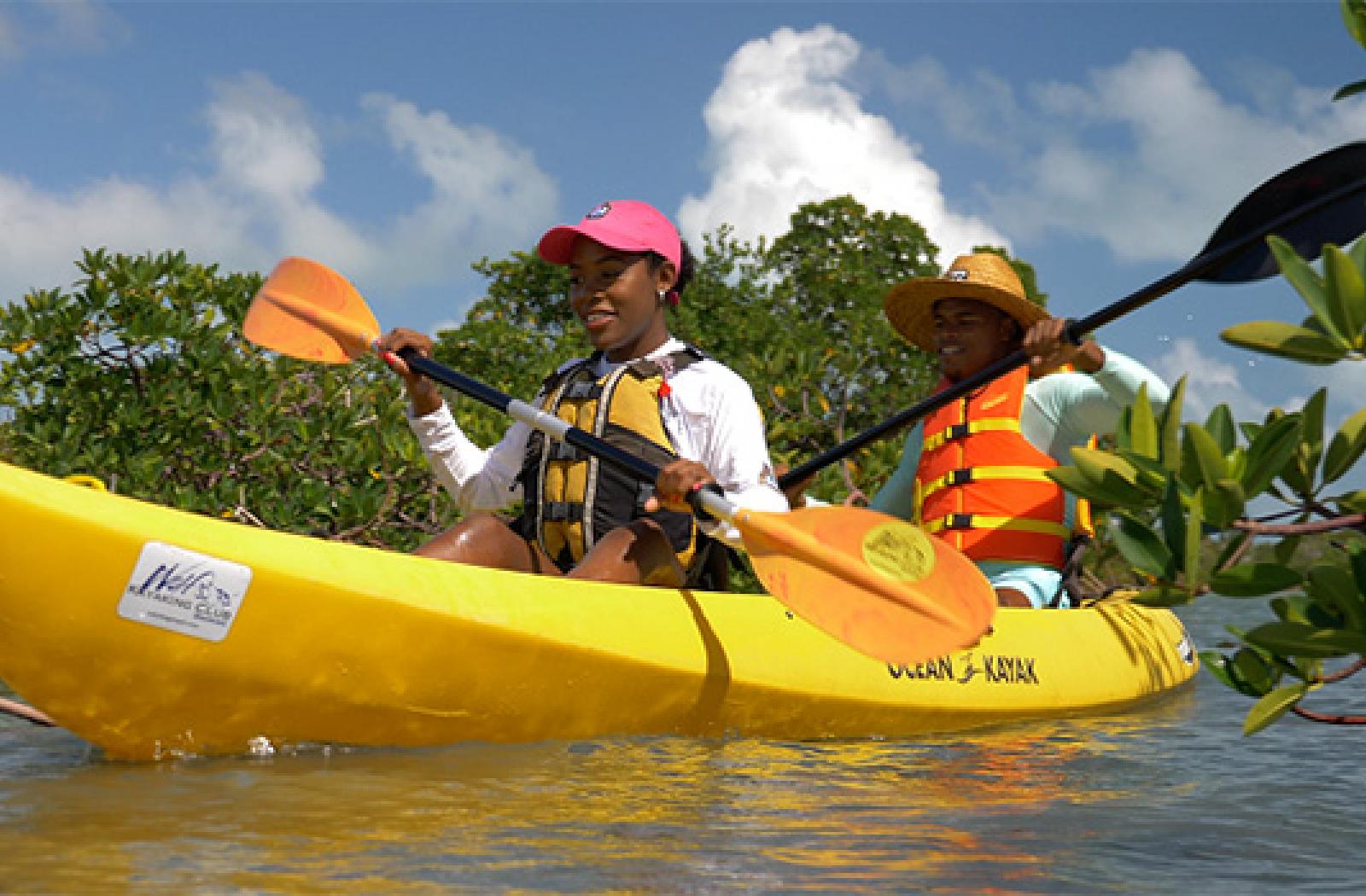 National Parks and marine protected areas in The Bahamas both exemplify and help protect the archipelago’s vast marine and terrestrial ecosystems. But despite their important role, they are often ignored by the local community, who rarely visit or feel pride for them. To rekindle this lost relationship, Elijah raises awareness of the parks and marine protected areas and impacts of climate change through visual storytelling, which he believes is more effective for communicating with people than complex data and graphs.

How well do you know your parks? This is the question 22-year-old Elijah Sands wants other Bahamians to reflect on.

National Parks and marine protected areas in The Bahamas both exemplify and help protect the archipelago’s vast marine and terrestrial ecosystems. But despite their important role, they are often ignored by the local community, who rarely visit or feel pride for them.

To rekindle this lost relationship, Elijah raises awareness of the parks and marine protected areas and impacts of climate change through visual storytelling, which he believes is more effective for communicating with people than complex data and graphs. The success of his work is proving him right.

Elijah Sands is a Senior Communications Officer at the Bahamas National Trust.  He considers himself an adventurer who leaps at any opportunity to be outdoors exploring nature.

His initiation into marine life and storytelling began in 2015 when he won an essay competition that sought to find out how students would protect the environment if they became certified scuba divers. As his prize for winning the competition, he went through a scuba certification process and had his first life changing scuba dive.

“I will never forget the first scuba dive I did, in Southwest New Providence. Seeing the coral reefs, fish and cool things I always wanted to see; I couldn’t stop smiling once I came out of the water,” says Elijah. 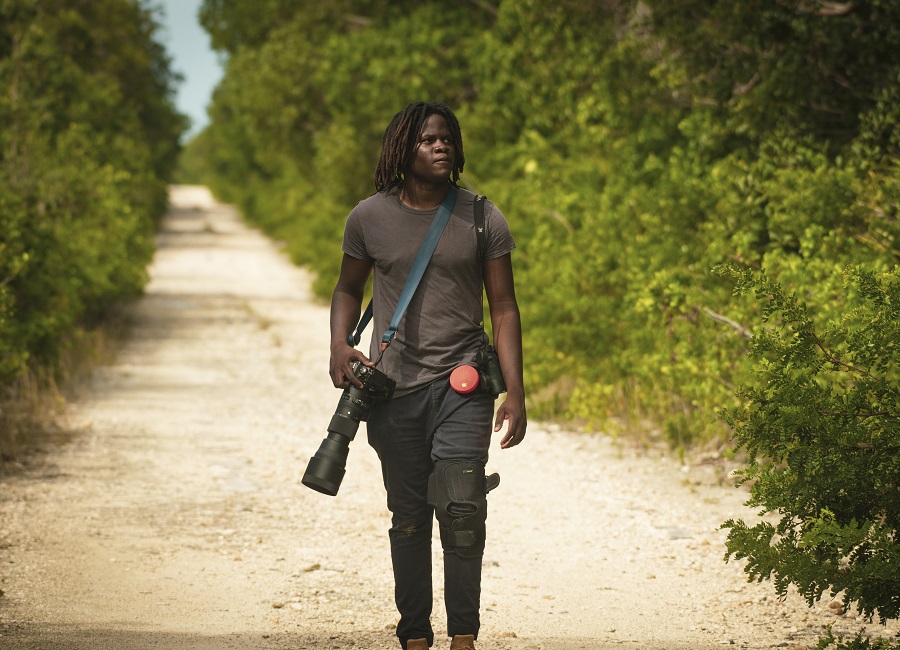 Elijah Sands at work in a Bahamas National Park

One of the reasons Elijah began looking at new ways to tell the story of marine conservation, is that usually information is developed by scientists. Their findings are often published in a complex and technical format that is not easily understood by wide audiences, which means people do not respond to it.

For example, in 2017-2018, The Bahamas National Trust held meetings with local fishermen to understand their perception of marine protected areas. It was clear the fishermen recognised protected areas as a conservation tool. But there were comments – such as “parks with fairytale benefits” and “don’t come here and take away our best fishing spots” – that showed misunderstanding around the need for a sustainable solution to threats facing marine ecosystems: their very source of livelihood.

During his role at Bahamas National Trust, Elijah also realised the disconnect between the community and their national parks. He noticed that while other countries invest a lot in promoting their parks so citizens – especially at a young age – to develop a sense of pride for them, the same could not be said to the same extent for The Bahamas. 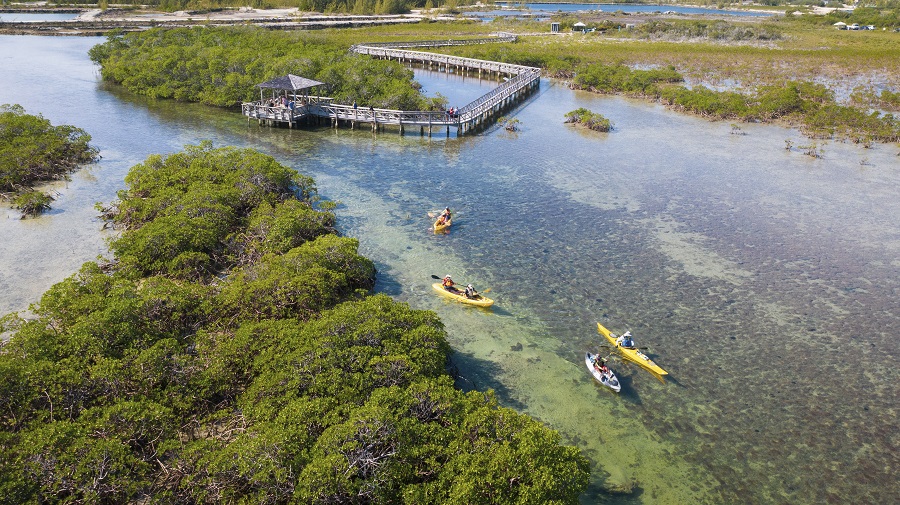 Visitors kayaking near mangroves at a Bahamas national park

When talking about environmental and climate change issues, Professor Dan Fagin, a Pulitzer Prize winner, insists “story telling is part of the success” - depicting the pivotal role of journalism.

According to The National Storytelling Network, storytelling engages audiences through deep emotional and personal connections, as opposed to just facts. Because this is more memorable for people, it is more likely to encourage them to take action.

In this way, Elijah began his journey to connect Bahamian people to these special Bahamian places by taking photos and creating videos of the national parks and marine protected areas and sharing short compelling stories about them on the organisation’s social media accounts.

He highlights different people’s experiences and raises awareness of specific issues in the parks, such as the effects of hurricane Dorian on the natural environment. 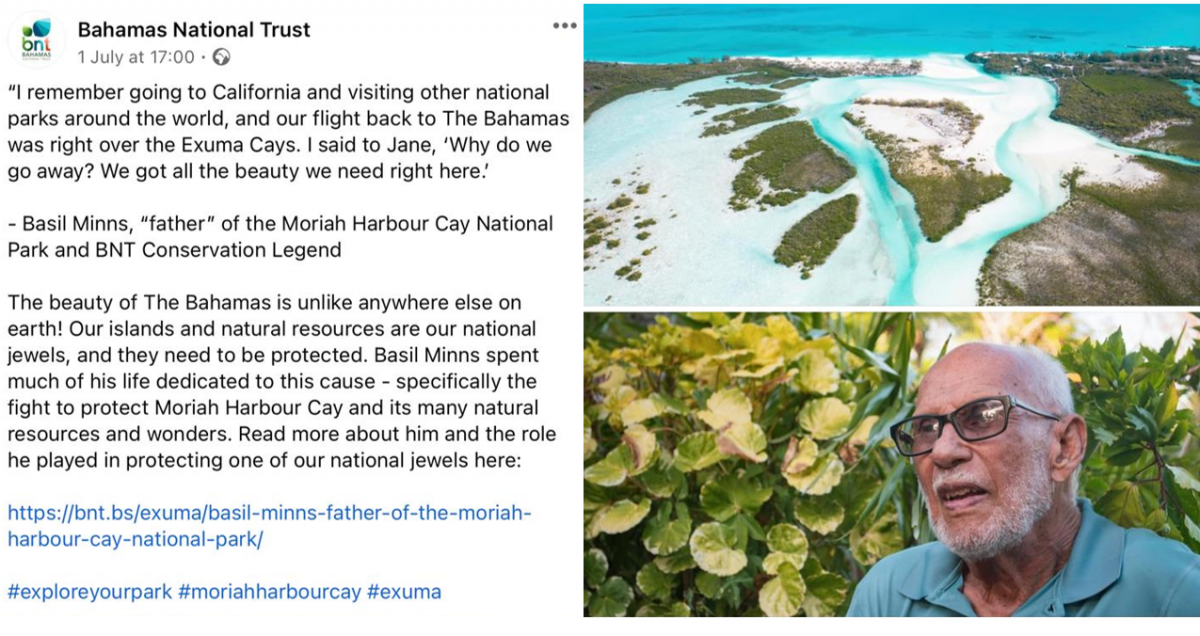 Through Elijah’s storytelling, other stakeholders including corporate organisations have approached The Bahamas National Trust for partnership. One was the Bahamas Sabbatical, a project endorsed by The Bahamas Ministry of Tourism and sponsored by Airbnb.

Aimed at letting the world know The Bahamas is still ‘open for business’ despite Hurricane Dorian in 2019, the Sabbatical provided an opportunity for adventurers to visit islands and get involved in hands-on volunteer work alongside local professionals, in activities that help restore natural resources. Activities involved coral reef restoration, support for ethical fishing and traditional agriculture.

Elijah’s messages have also reached international audiences, with influential people from outside of The Bahamas visiting the parks and marine protected areas, bringing tourism investment not only to the government but also the local community. 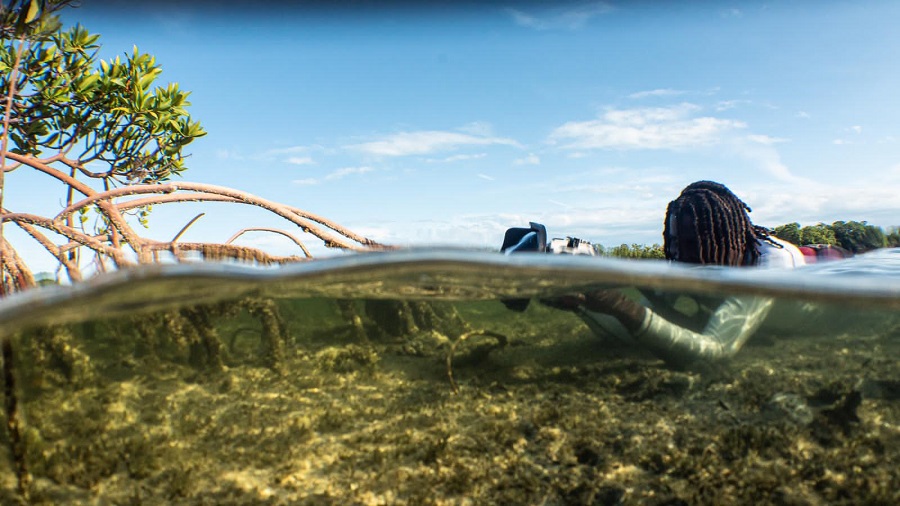 In 2019 alone, Elijah estimates that Bahamas National Trust conservation messages reached 15 million people through social media, numbers which are converting to increases in the amount of visitors to the parks.

“I run into people and when I talk to them they say, ‘I knew about this park from Facebook, or something that I saw on social media’ and I automatically know that my work is actually getting people to these parks,” he says.

Through conversations Elijah has with visitors, he is also noticing a change is perceptions for marine protected areas. And as more people visit the parks, word of mouth is also spreading his environmental messages.

“When you get someone to care about something, that gradually leads to advocacy and they become a champion for support, either financially or in kind, and they tell other people and the trend goes on and on,” he adds. 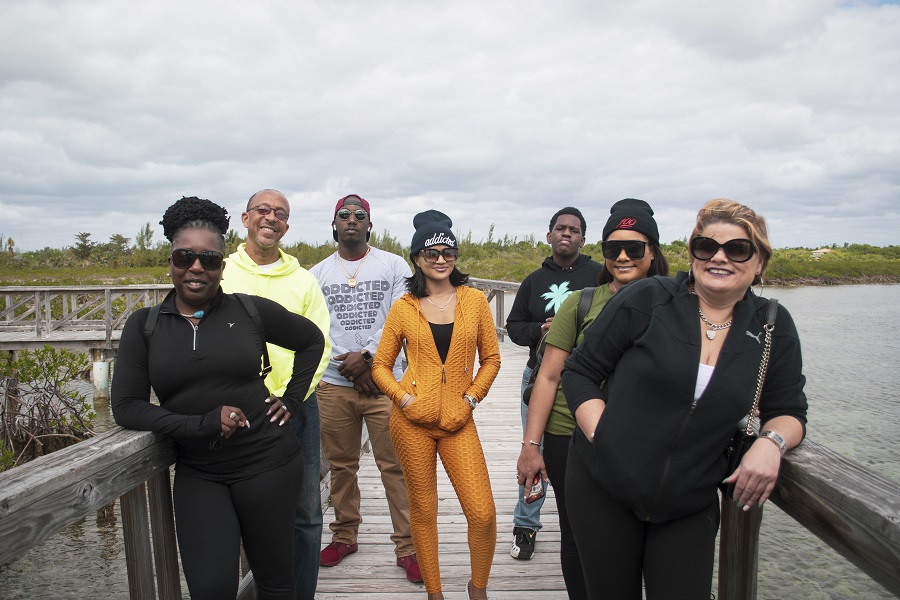 One of Elijah’s biggest challenges is the stigma attached to marine protected areas by the local community.

“A lot of fishermen feel like when you create these protected areas, you are taking something away from them. You are taking away their fishing areas, where they can go catch fish and make money, so there is always that negative stigma which I am trying to shake,” he says.

Elijah explains that this this negative perception dates more than a half a century back. But while others find it hard to see the bigger picture, he has vowed to keep his storytelling initiative alive in the hope they contribute to a better marine environment for future generations. 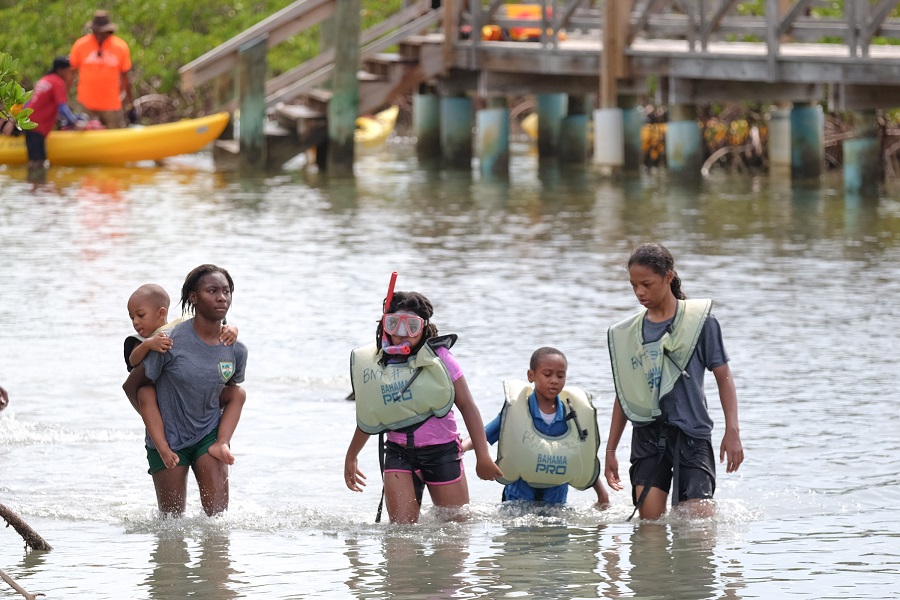 Elijah and his team were fortunate to continue with their marine storytelling projects during the COVID-19 pandemic because they were considered essential service providers, though there were restrictions on some areas.

He appreciates how lockdown measures made humans crave the outdoors and want to reconnect with the environment around them – a reminder that spending time outdoors is beneficial to mental and physical health.

Being cramped indoors also gave many people the opportunity to reflect on the importance of nature. Following the ease of COVID-19 restrictions, Elijah has indeed seen a surge in park visitors.

“COVID-19 provided an opportunity to show that national parks and protected areas are essential to human health, but also showed that they present an opportunity for economic recovery from the pandemic,” says Elijah. 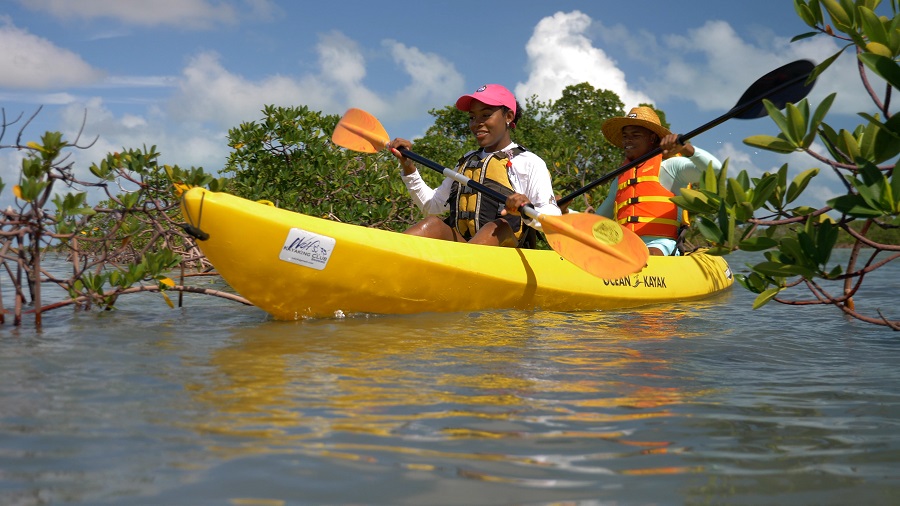 Elijah agrees you cannot change people’s mindset overnight. However, there are many approaches that can help nurture a sense of pride for the environment and marine protected areas.

He recommends introducing mandatory education on the environment and marine protected areas at an early age, to help shape attitudes and future interactions with these places.

Elijah also wants governments to adopt more environmental laws to protect the oceans and marine environment, which should be accompanied by heavy penalties.

Today Elijah manages a modest team and aspires to work with more young people. He believes there are many magnificent photographers around the world, but not enough use their skills to raise awareness of our environment.

“You can take a picture of a bird today - but is one of your goals for that photograph to support the work to conserve that bird?” he asks.

In whatever way they can, he advises other young people to look for new ways to tell the story of conservation in their local area.

Just like Elijah, their story could end up having an impact that goes much further than their local area – it could create a relationship with the natural world that helps create a safer future for us all.

Buonocore, M., ‘Storytelling is Part of the Solution to the Climate Dilemma’ Foresight The CMCC observatory on climate policies and future, 2019, https://www.climateforesight.eu/future-earth/storytelling-is-part-of-the... (accessed April 15 2021)

PricewaterhouseCoopers, The Power of Visual Communication: Showing your story to land the message,

What is storytelling, National Story telling network [website], https://storynet.org/what-is-storytelling/ (accessed in May 13 2021)

Nguyen J., Social Media Storytelling - How To Do It Right?, Socialpilot [website], https://www.socialpilot.co/blog/social-media-storytelling (accessed May 13 2021)