How space tech is aiding mangrove conservation in the Commonwealth

Powerful satellites orbiting hundreds of miles above Earth are helping some Commonwealth countries save and restore vital mangrove ecosystems while combatting climate change.

Officials from Trinidad and Tobago and Sri Lanka recently shared how they are using sophisticated earth-imaging technology to gather valuable data on the coverage, health and changes in the features of mangroves along their coastlines and rivers.

The information is critical to stemming the rapid disappearance of mangroves worldwide, with 30 to 50 per cent of these marine ecosystems lost mainly to deforestation over the last 50 years. The data is also key to understanding mangroves’ capacity to capture and store away carbon from the atmosphere – the main driver of climate change.

Countries shared their experiences during an online event organised by the Commonwealth Secretariat to mark International Mangrove Day on 26 July, which also included insights from Planet, a world leader in satellite imagery technology.

Director General of Ocean Affairs, Environment and Climate Change at the Foreign Ministry of Sri Lanka, Hasanthi Dissanayake, highlighted: “Sri Lanka became a global leader in mangrove restoration and conservation after the devastating impacts of the 2004 Boxing Day Tsunami. We learnt from the experience and have spearheaded the conservation in our country and across the Commonwealth.”

The country has since advanced in strides, championing the Commonwealth Blue Charter Action Group on Mangrove Ecosystems and Livelihoods since 2018, establishing a cross-sectoral Mangrove Taskforce and adopting a national policy on the conservation and sustainable use of mangroves in 2020.

The Director of the Biodiversity Secretariat at the Ministry of Environment, Pathma Abeykoon, also shared how satellite technology is used to track changes to mangrove ecosystems over time, in addition to modelling disasters and mapping vulnerable areas for disaster preparation, management and recovery.

In Trinidad and Tobago, scientists at the Institute of Marine Affairs (IMA) combined several different layers of data in order to learn how to manage mangroves sustainably, and study its role as a carbon ‘sink’.

“If we're able to understand how much carbon is stored and sequestered in these forests, then we can start an argument as to why they should be conserved and protected, because it's one of the ways for us to mitigate against climate change.”

The IMA has been using a combination of aerial and satellite imagery, the most recent Google Earth imagery, LandSat data produced by American Space Agency (NASA) and other sources to monitor mangrove ecosystems in Trinidad and Tobago over a 25-year period from 1994 to 2019. The findings were published earlier this year.

Data sets from 3-D laser scans and physical measurements of mangroves, soil analysis and carbon testing, are also being used to accurately quantify the carbon stored in mangrove forests, both above and below the ground.

Ms Gooding highlighted the benefits of free online and virtual training modules offered through Commonwealth Blue Charter which trains mangrove technicians and managers on the use of GIS tools to map mangroves and contribute to policy development.

Presenting the vast applications of satellite data, Planet’s Strategic Accounts manager for the EMEA region, Mark Richardson, said: “At Planet, we collect massive amounts of data, every single day. We want to democratise access to our imagery and fundamentally that means ensuring those people who need it the most are able to access those data.”

A frontrunner in the field, Planet uses 180 small satellites to scan and produce images of the Earth every day at a 3-metre resolution, with 21 larger satellites scanning at 50 centimetre resolution. Atleast 20 terra bytes of data are downloaded from the satellites every single day.

This data has been used by a wide range of stakeholders, including mangrove researchers focusing on ‘blue carbon’, habitat mapping and protection, and storm impacts. Adviser and Blue Charter lead at the Commonwealth Secretariat, Jeff Ardron, said: “One of the aims of the Commonwealth Blue Charter is to bring countries together, along with other action-oriented partners, to share experiences and discuss solutions to common challenges. These include new approaches that take advantage of emerging and low-cost technologies to build resilience of local communities.”

The webinar was part of an ongoing series focused innovative solutions and best practices being implemented by the 10 country-led Action Groups of the Commonwealth Blue Charter. 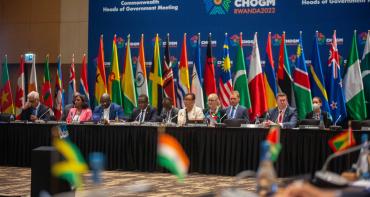