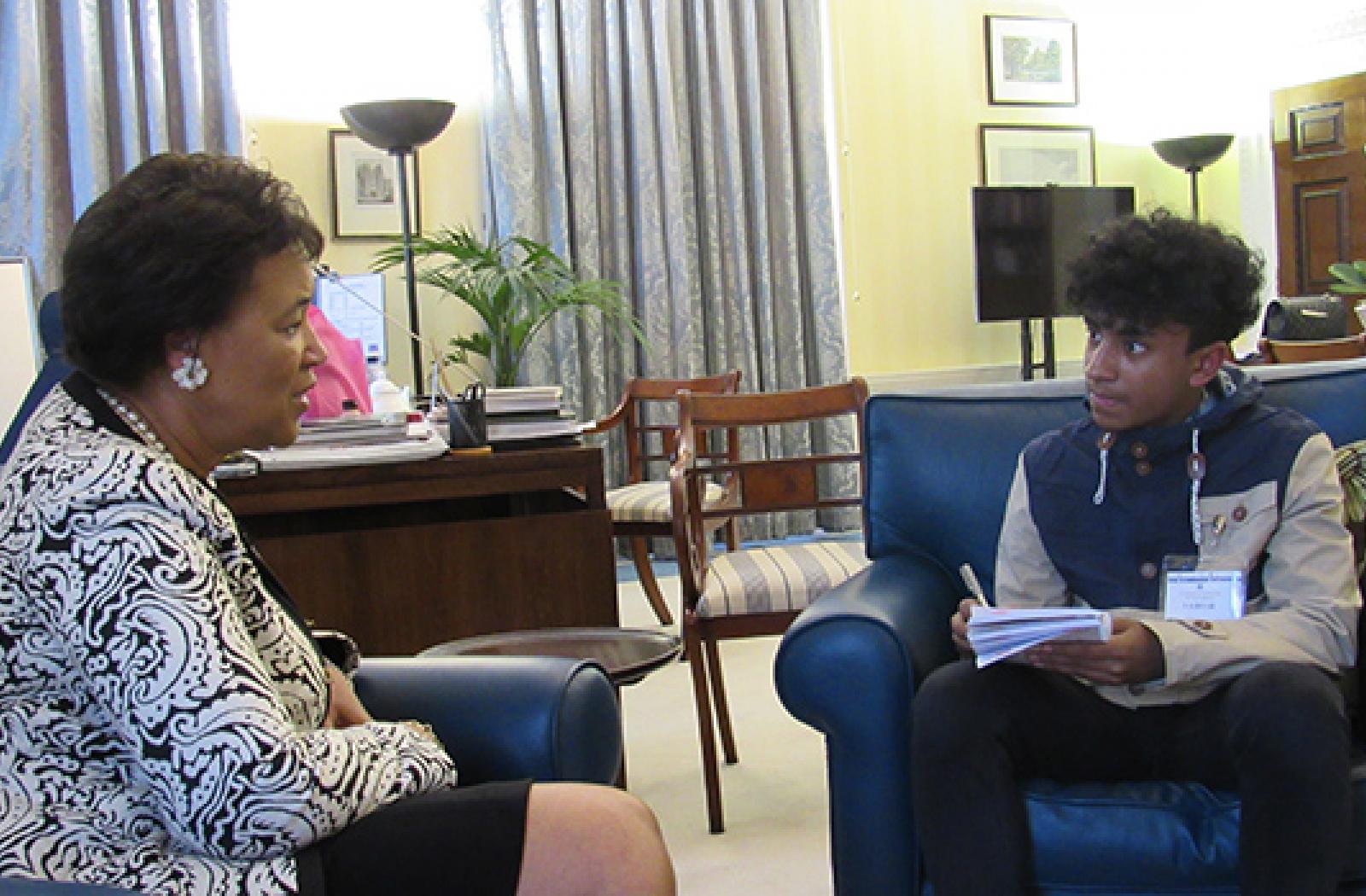 The Commonwealth was a name which had from time to time popped up in one of my history lessons, however I did not truly know what it was or what it stood for. I was very intrigued by the fact that it was home to 2.4 billion citizens and that it included some of the world’s largest, smallest, richest and poorest countries. I was very impressed by the fact that there was a huge variety of member states, and this then made me question, what does it do for the youth, in all of those different countries?

As a member of the Redbridge Youth Council for the past three years, and a member of my local ‘young cabinet’, it has always been in my interest to get the best for the youth. This is why I felt a real urge to find out exactly what the Commonwealth was doing for the youth all around the world from its 52 member states.

I couldn’t have been more impressed. I felt that Secretary-General Scotland was extremely passionate about the youth and our future. I asked her first, about how the Commonwealth as an organisation helps youth all around the world. She told me she was “incredibly committed to help the youth around the Commonwealth reach their developmental goals and do the things they really want to do”.

I was very pleased with this response as I feel many young people around the world, such as myself, have huge ambitions, and gaining support from different people is the first step in achieving such goals. And to know that an organisation as huge as the Commonwealth is dedicated to helping youth reach these goals is extremely reassuring.

She also told me that us, “youth are the future” and it is critical young people have “aspiration, inspiration and knowledge that they can do anything they want”. I felt that this idea which Mrs Scotland shared with me was a huge sign that we as the youth are in the driving seat, and that people like Mrs Scotland herself, in powerful positions, were determined to help us learn to ‘drive’.

The following topic of discussion was around an increasingly apathetic youth and how exactly the Commonwealth was helping to promote engagement. The Secretary-General told me it was crucial that politics was demystified and young people understood that politics practically relates to all walks of life and is thus about us. She expressed that it upsets her when young people push themselves away from politics.

This made me realise, Secretary-General Scotland was someone who was determined to make change, and to help facilitate the youth make that change. She thinks young people need legitimate opportunities to make their voices heard and she felt that the youth should start to take a lead. This point was music to my ears as I personally think us youth should begin taking opportunities in leadership roles and strive to make change. The fact that the Secretary-General of an organisation as large as the Commonwealth wants to help youth achieve leading roles, acts as a huge beacon of light at a time when it is easy to lose hope.

My final question to the so far, enthusiastic and charismatic Secretary-General was about the one piece of advice she would give to any ambitious young person. I felt any advice from a person clearly as intelligent as her would be something that young people like me would keep for a long time. She told me that young people should follow their passion, and not disrespect it, and that we should aim to do what we love.

She then went on to tell me that she believed that God had given every single one of us a talent, and that we should aim to find it and enjoy it. I felt that this advice given to me by the Commonwealth Secretary-General was very helpful and young people should start to listen more to the older generation and their experiences, as for the future, it could prove very useful.

It was crucial that young people were not “frightened of failing, but rather terrified of not trying”, she then told me. This made me feel very positive about the future, as I now realised that any young person in the world could, with the help and support of huge organisations like the Commonwealth and key figures such as Secretary-General Scotland, achieve any goal or dream they want.

After leaving the building in which the meeting took place, on the train back home, I realised that I had learned a lot in my short exchange. I had learned that the youth were not alone, that we have support and that the future truly is ours and it is up to us to decide the outcome. Although I went into the interview feeling very nervous, I came out feeling a very confident young person, who was in a world where support was never far away, and a young person who, like Secretary-General Scotland told me, “might just change the world”.

Find out more about the Commonwealth's work in youth development: thecommonwealth.org/our-work/youth

Become a Commonwealth Correspondent - a global network of emerging young leaders and aspiring writers and social commentators aged 15 to 29.