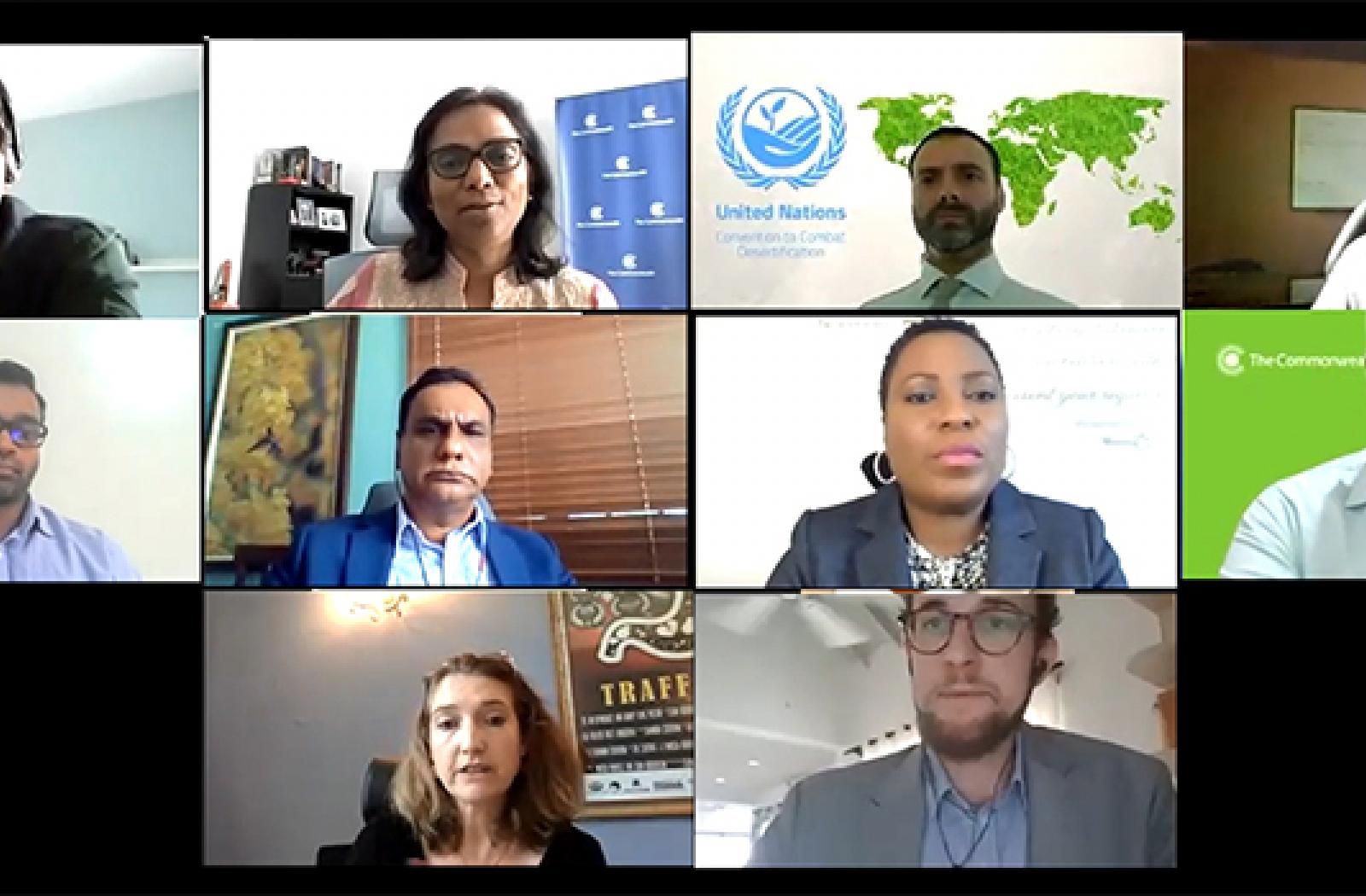 More than 70 delegates from 16 Caribbean countries joined international partners to discuss financing solutions for climate action on land, and share their experiences in tackling the inter-related challenges of desertification, biodiversity loss and climate change.

More than 70 delegates from 16 Caribbean countries joined international partners to discuss financing solutions for climate action on land, and share their experiences in tackling the inter-related challenges of desertification, biodiversity loss and climate change.

The virtual event was organised jointly by the Commonwealth Secretariat, the Regional Liaison Office for Latin America and the Caribbean and the Global Mechanism of the United Nations Convention to Combat Desertification (UNCCD), and the Regional Collaboration Centre for the Caribbean of the United Nations Framework Convention on Climate Change (UNFCCC).

“Land Degradation exacerbates the existing vulnerabilities of Small Island Developing States (SIDS) and other vulnerable countries to environmental challenges, such as climate change, which severely undermine the socio-economic resilience of these countries.

“The Commonwealth Secretariat has recognised the need to leverage synergies between biodiversity, climate and land, thereby bringing together the three Rio Conventions to catalyse coordinated action on land.

She added: “These interlinkages are so crucial as the adaptation of land systems to climate risks is a key component of the National Adaptation Plans (NAPs) of member countries.”

These conventions recognised that biodiversity loss, climate change and land degradation are interrelated major factors which threaten agriculture, food and water security, forests and biodiversity, endangering the livelihood of millions of people, particularly women and youth of developing countries.

During the webinar, representatives from the Commonwealth Secretariat, the UNFCCC Regional Collaboration Centre for the Caribbean (RCC St. George’s), UNCCD, the Caribbean Community Climate Change Centre (CCCCC), the Caribbean Development Bank (CBD), the Caribbean Biodiversity Fund (CBF) and the UK COP26 Presidency in the Caribbean presented their research and actions in these areas.

Delegates discussed how to move towards a “coordinated approach” in implementing the three Rio conventions. They agreed on the need for increased levels of international finance for climate action, especially for adaptation measures in vulnerable countries. They discussed the importance of holistic and innovative financing, along with the critical need to enhance access to climate finance through long term capacity-building.

For example, the Commonwealth’s Climate Finance Access Hub (CCFAH) supports governments in applying for and securing international funding for climate action, by embedding long-term experts within ministries to build the relevant human and institutional capacity within the country. To date, CCFAH national advisers have been deployed to 15 member countries, and have helped to mobilise US$43.8 million of climate finance for member states, for 31 approved projects, with more than US$760 million in the pipeline.

Delegates also discussed the issue of debt, which has become more complicated under the COVID-19 pandemic. As high debt levels can affect a government’s ability to invest in building resilience, there was a call to consider a country’s vulnerability when trying to access debt relief and concessional funding.

Concluding the discussions, British High Commissioner to Trinidad and Tobago, Harriet Cross, reiterated the UK Government’s commitment as President of the forthcoming UN Climate Change Conference COP26 to greater action on adaptation and

The event is part of a series of regional webinars being held in the lead up to the forthcoming Commonwealth Heads of Government Meeting later this year.