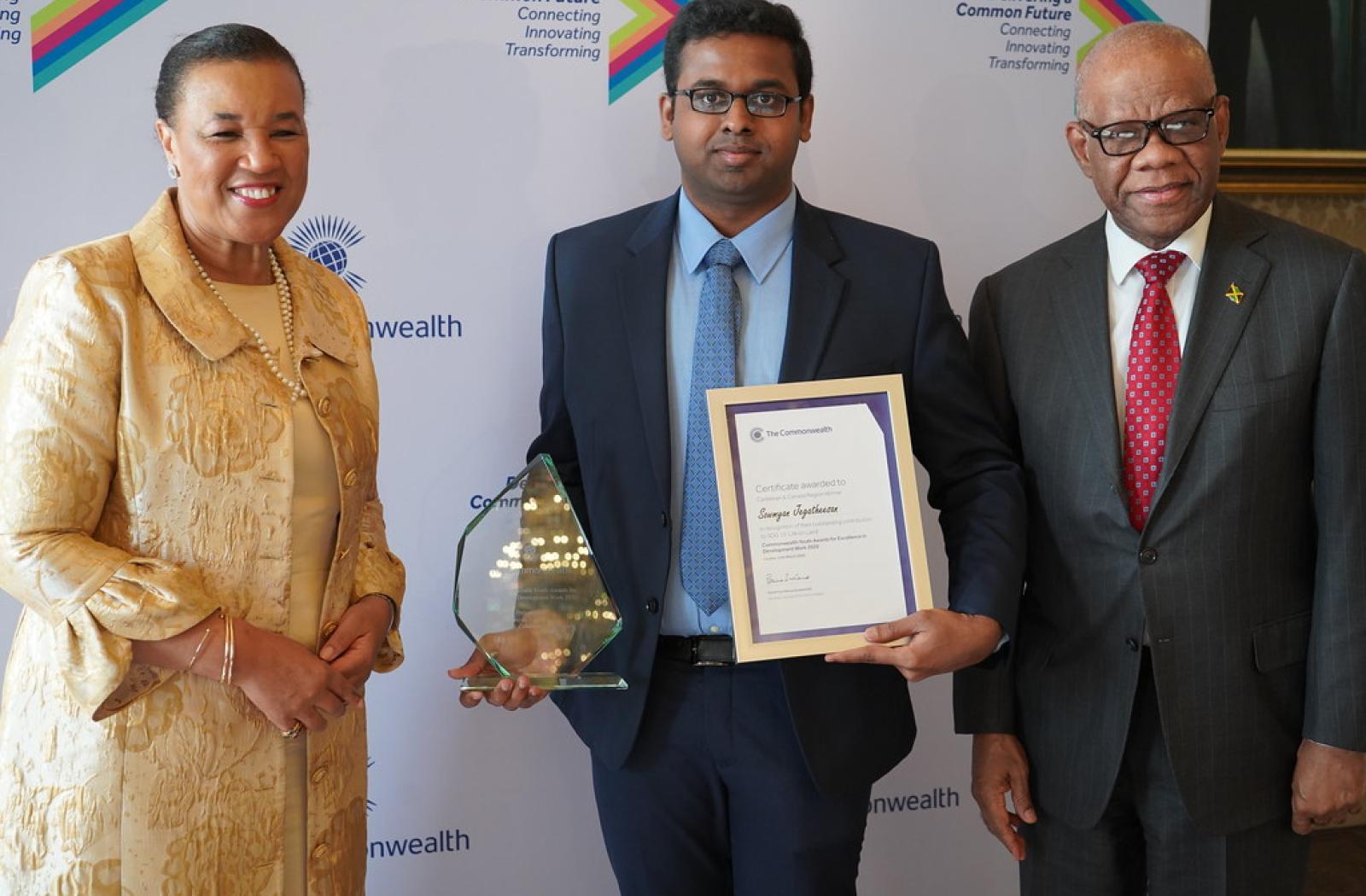 Wildlife populations both on land and in the sea are under threat across the Commonwealth. Two youth leaders with very different policy and technology careers are forging their own paths to address these urgent problems.

The conservation work of Lonna Bethel in The Bahamas and Sowmyan Jegatheesan from Canada is a compelling insight into the way young people are using their unique skills to innovate towards a better future for all.

Sowmyan Jegatheesan is the founder of SystemaNaturae.org, one of the world’s largest online sources for global wildlife projects, research and datasets. The platform “creates awareness and helps communities build resilience by better understanding climate change, migration patterns and human-wildlife conflict”. His website is used by research centres, universities, think tanks and government organisations including NASA, the Oceanographic Institute and the Defense Laboratory in the UK.

An engineer with a background in technology and data sciences, Sowmyan’s work on the project began in 2015, while reading the Living Planet report by the World Wildlife Fund, a census of wildlife species across the globe. In the report he discovered that between 1970 and 2010, more than 70% of wildlife populations declined, whereas the human population had almost doubled.

Intrigued by the statistics, Sowmyan wanted to double check it through online wildlife datasets. But he found “there was no one-stop web portal, rather siloed open data on each country website”. So, he began putting together a simple web platform, which people could use as a search engine to access any wildlife open data set, and soon SystemaNaturae.org was conceived.

The online portal indexes open datasets from government sites, translates them into the English language where necessary, adds metadata tags and then consolidates and links to the data, rather than duplicating it. Sowmyan explains: “In that way, when data is changed at source, the SystemNaturae.org data is automatically updated.”

He says volunteers in India, the United Kingdom and Canada, “curate, classify and fix any issues, and ensure data integrity is maintained at the highest possible levels”. Operational costs are covered by the Government of Canada under a youth grants initiative.

Sowmyan has also directed a financial award towards developing the website, that he received as the regional winner for Canada and the Caribbean in the 2020 Commonwealth Youth Awards. He is also a World Economic Forum Global Shaper and is a part of the Global Young Leaders Programme.

Recognition from the United Nations, Harvard University and the Royal Society of Arts have also helped SystemaNaturae.org gain publicity, along with Sowmyan’s network of stakeholders who he says mentored him through his journey as a social entrepreneur.

Sowmyan believes “technology will play a crucial role” in helping countries achieve their Sustainable Development Goals (SDGs), and that balance is the key to supporting any environmental movement.

He insists “one should not have to sacrifice a ‘career’ in order to be a conservationist”, but states that taking small steps is crucial: “Whether it is implementation of ESG (environmental, social and governance) practises at your workplace or keeping the SDGs in mind during day-to-day activities. These small steps incrementally contribute to larger change over time.”

Offering simple advice to other social entrepreneurs he says: “If you see a problem, solve it”, and believes the same can be applied to policymakers at the national level too.

Instead of enforcing “overnight laws which could endanger people’s livelihoods”, he insists that it is “better to systematically taper a problem over a longer period of time to eliminate an issue or else illegal marketplaces will always exist”.

One young Commonwealth leader who has the power to enact such meaningful change is 27-year-old Lonna Bethel, who is proactively involved in curbing Illegal, Unreported and Unregulated (IUU) fishing in The Bahamas.

Lonna is the youngest Assistant Port Controller at the Port Department of the Bahamas, and is also pursuing a PhD in Maritime Affairs at the World Maritime University, Malmö, Sweden. Her research deals with effective implementation of the Port State Measures Agreement, which aims to address IUU fishing.

Globally, IUU fishing is estimated to be worth at least US$ 23.5 billion a year. While fish stock is not currently a big problem in The Bahamas, industry experts have linked the issue of IUU fishing to the islands’ depleting marine ecosystem. The illegal activity also poses a threat to the livelihoods of local fishermen and the economies of island states that depend on revenue generated from fishing.

In order to curb IUU fishing, The Bahamas has signed the Port State Measures Agreement from the Food and Agriculture Organization (FAO) of the United Nations. As with other small-island developing states, The Bahamas has limited resources and capabilities, so effective implementation of the Agreement is critical to tackling the issue and sustaining the local marine ecosystem.

Lonna’s role at the Government of The Bahamas helps contribute towards SDG14: Life Below Water. As Assistant Port Controller she participates in national discussions and inter-agency work around maritime affairs, and has created a 'toolkit' to effectively implement the Agreement in the Caribbean.

She has also capitalised on opportunities such as Youth in Parliament, which allowed her a platform in the Bahamas’ House of Assembly to advocate for the development of a national plan to address climate change.

Stakeholders of the future

Lonna believes in “making your own opportunity, rather than waiting around for a door to open”. She advocates for more young people to be in positions of power, because, she states: “we are the stakeholders of the future and we need to control the narrative and design the world around us”.

She urges everyone to tap into the power of social media to connect with others facing similar issues, and join forces to accelerate climate awareness.

But like Sowmyan, Lonna also maintains that long-term solutions are more effective than “speedy quick fixes”. She says creating awareness is one part of the solution, but true impact comes from strategic action on the ground.

Lonna finds it “refreshing to present a youth perspective on national matters” within government, but she says more young people should be in positions of power to achieve faster change.

It is clear that both Lonna and Sowmyan are examples of young changemakers in policy and technology who have created opportunities for themselves by focusing in on solutions to urgent environmental problems.

Their boundless energy in fighting to protect the Ocean and wildlife of Commonwealth countries and beyond reflects the spirit of our young people – powering us all to a safer, healthier living planet.

Image: Commonwealth Secretary-General, Patricia Scotland with Sowmyan Jegatheesan from Canada and the regional representative from the Jamaican High Commission at the 2020 Commonwealth Youth Awards