Blog: Mentoring women and youth matters for conservation in Mauritius 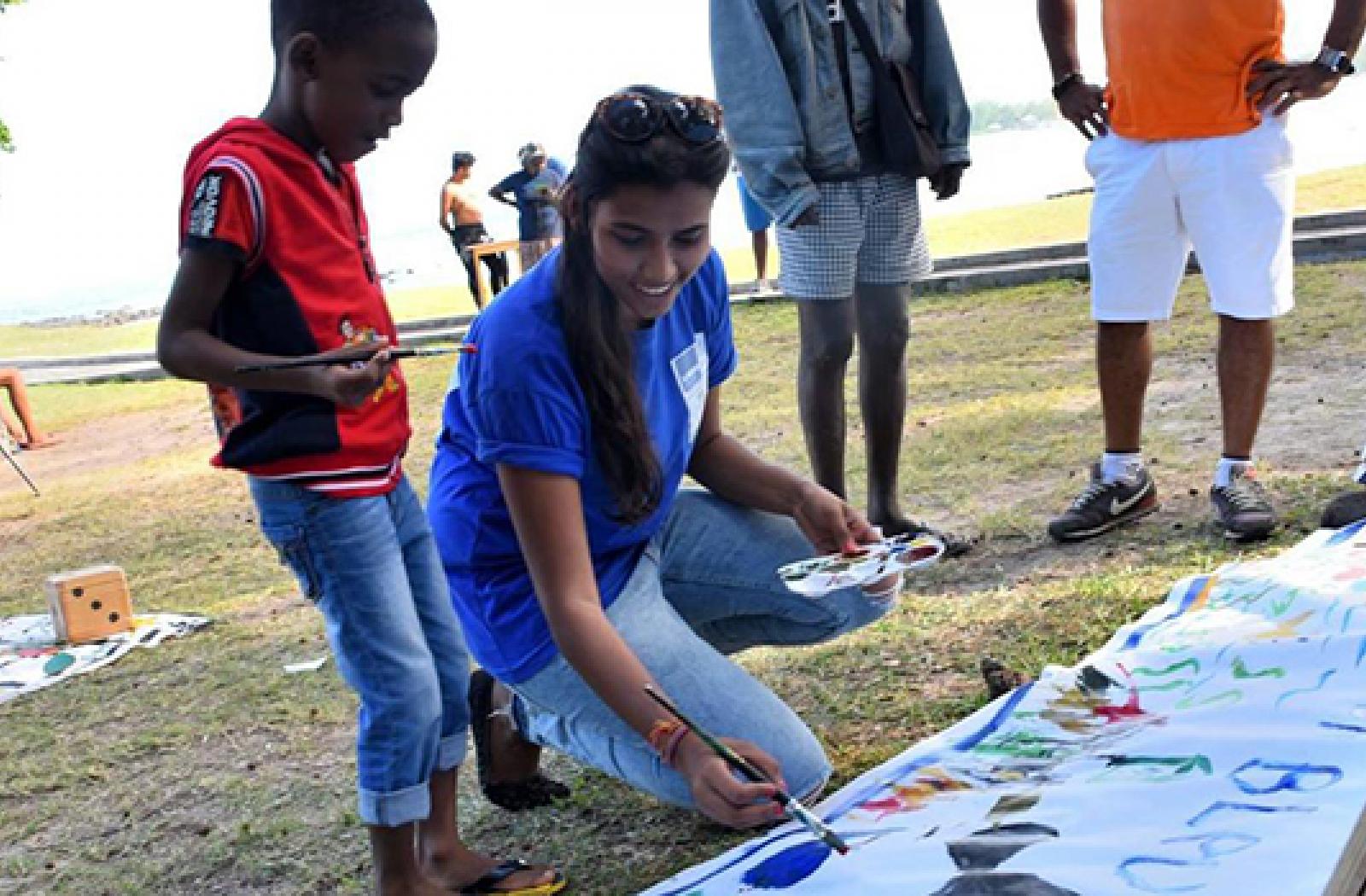 This Commonwealth Secretariat blog about marine conservationist Josheena Naggea, is part of a series launched during Youth4Climate and continuing in the lead up to COP26 and beyond, featuring young people from across the Commonwealth who are leading the way on local climate action.

This Commonwealth Secretariat blog is part of a series launched during the lead up to COP26, featuring young people from across the Commonwealth who are leading the way on local climate action. View the full blog series.

Many people understand that spending time in nature inspires us to protect our living planet. But to make real progress, we also need to spend time with other environmentalists who are already leading the way.

This is the story of Josheena Naggea, a young woman from Mauritius, a large ocean state in Africa. While growing up by the ocean first piqued her interest to study conservation, it was mentorship that galvanised her advocacy and made her the influential ocean champion she is today.

Josheena is currently finishing up her PhD at Stanford University, focusing on the value of natural and cultural heritage in marine conservation.

But she realised much earlier on in her education that many environmental issues could be resolved if local people were involved.

While studying environmental management in Malaysia in 2014, Josheena spent sleepless nights protecting nesting sea turtles and their eggs at Lang Tengah Turtle Watch – only to find sea turtle eggs for sale openly in a nearby market.

Later, during a research trip to the Danum Valley Conservation area in Borneo, she listened to a British researcher speak about his experience working on pink pigeon conservation in Mauritius.

Josheena recalls thinking: “Here I am in a foreign land, learning from a foreigner about conservation in my country. Something about that felt weird and it definitely made me feel more keen to learn about these amazing projects in my home country.”

She was convinced then, and through other Africa-focused mentorship programs, that more young African scientists should be thinking about and resolving Africa’s problems.

Feeling that top-down systems tend to rarely acknowledge the community voice, Josheena now aims to legitimise the voice of minority stakeholders in participating and making decisions in ocean governance. 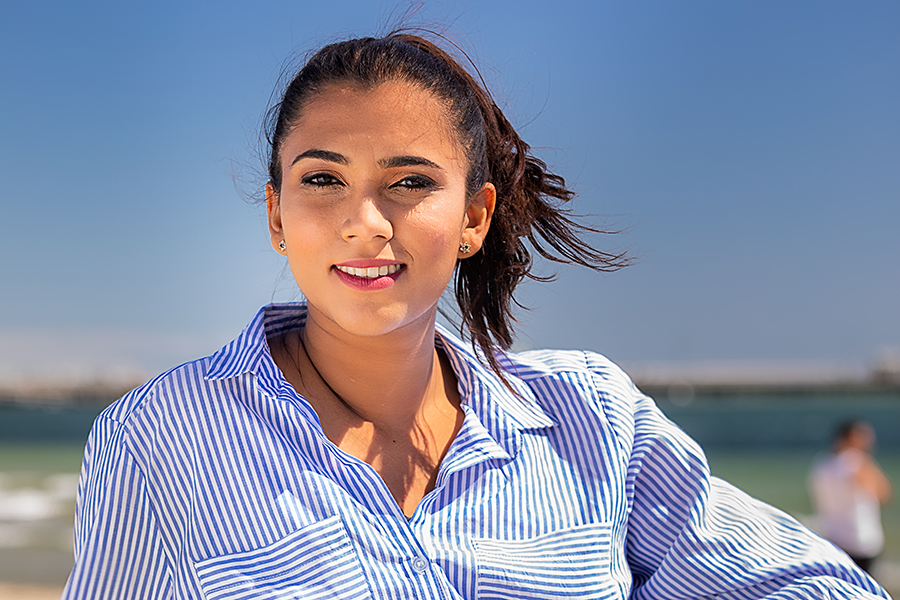 When Josheena returned to Mauritius after her studies, she started working for a marine conservation NGO on a sea turtles project.

She explains why ocean conservation was a clear choice: “Ocean governance as a career was unheard-of years ago. When I was starting a career, this felt like a risky choice to my family in terms of job security, but I wanted to have the most impact in the field of environmental conservation and they fully supported my decision.”

“I had lived through a terrible forest fire in southeast Asia. It felt very apocalyptic. At that age (my early 20s), I felt burdened by the state of the world and felt like I had to do something about it.

“Coming back to Mauritius, where we only have 1-2% of our pristine forest left, I felt that forestry is not where I could have the most impact. I also felt there was already a lot of focus on terrestrial conservation, whereas the ocean felt more overlooked.”

Once she started work on the sea turtle program, Josheena soon realised the importance of building relationships with the local community.

“Because we had such close ties with communities and people around the marine parks where we were located, most of the stranded turtles used to be reported to us by community members. It was a very clear reminder that it is important to maintain close contact with coastal communities.”

Josheena also worked closely on the first national octopus’ fisheries closure campaign to support sustainable fisheries and livelihoods in Mauritius. For two months, fishers were asked not to fish in order to let the species grow, up to double their size. Josheena says this decision was a “very tangible way” for fishers to see the benefits of seasonal closures and sustainable fishing practices.

Similar success was seen in the Marine Eco Guide project by the NGO Eco-sud, which trains eco-guides to conduct tours with a better understanding of the marine ecosystems in which they work.

“A lot of tourist operators when visiting marine parks tend to feed the fish, not knowing it disrupts the ecosystem. Our goal was to make sure that eco-guides understand the negative impact of some tourist behaviours, and are able to provide safe, innovative and eco-friendly tours.” 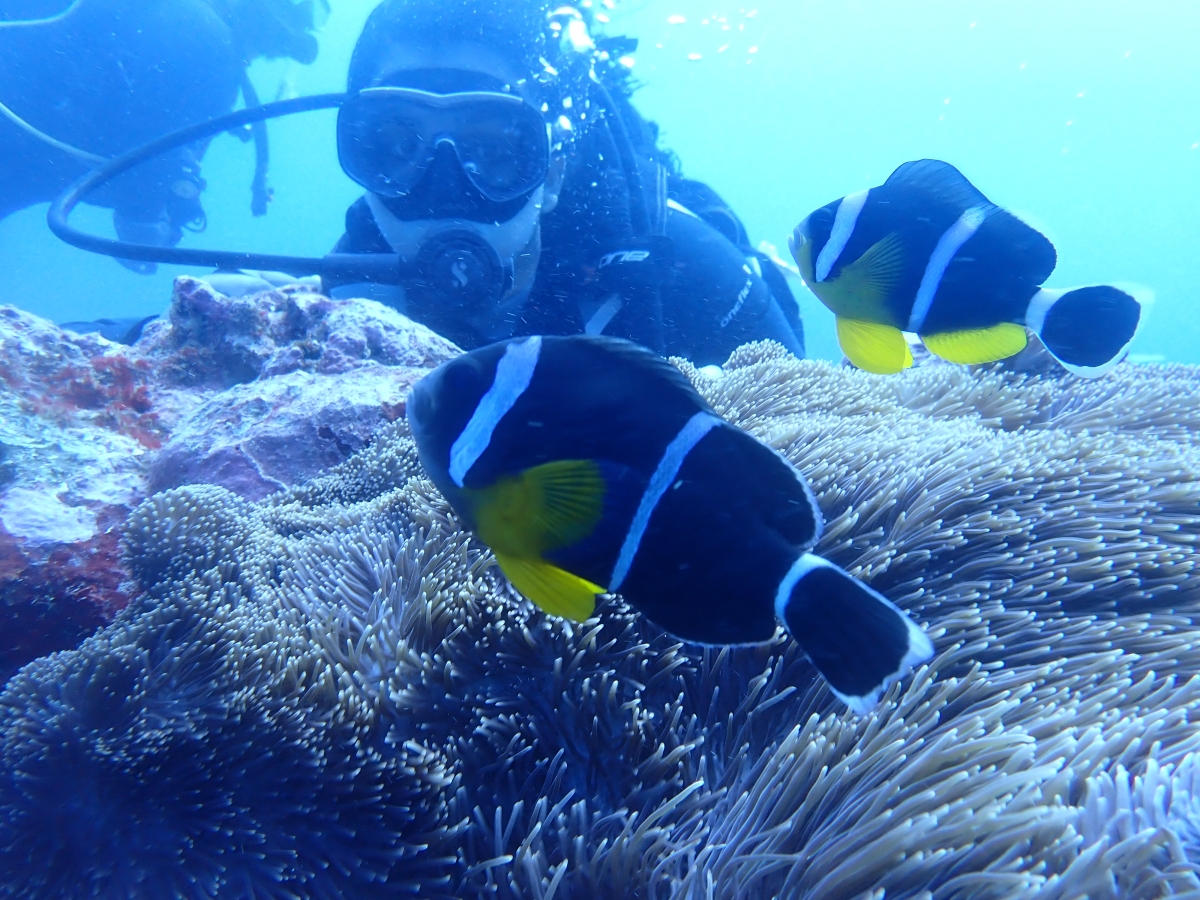 Josheena is now starting to see the results of her advocacy in the community – sometimes in unexpected ways.

Following an oil spill in the local area, she conducted a social-impact assessment to understand the compounded impacts of COVID-19 and the spill on coastal communities.

As she walked through the area after the disaster, she saw all the eco-guides she used to work with helping to make artisanal ‘booms’ to prevent the spread of oil, out of sugarcane bagasse, cloth fabrics and plastic bottles. Around 54 kilometers of the booms were made within days.

“The result of trainings and awareness events and that close relationship, is that we create ocean ambassadors in the process. The breadth and depth of activities they can be engaged in is so much more than anything just one NGO could have done.”

“When disasters strike, the people who have an existing connection to these ecosystems, who have been trained and who are aware of what is happening around them are going to be the first to act on it. By building capacity, the work goes on after the principals have left. The level of community mobilization during the oil spill demonstrated this impact. Given their own experience at sea, we also learn so much from the eco-guides in the process.”

Young people in particular are critical to making an impact in the local community. At the marine NGO, Josheena’s team consisted of volunteers, mostly aged between 18-30 years old, with more than 100 local and international interns who joined over a period of two years

With respect to the local interns and volunteers, Josheena says the work gave them a strong sense of belonging as they are contributing to something local to them that will have much wider and longer-term results.

She has now worked with more than 30 marine science students from the University of Mauritius, acting as research assistants. Some of her mentees are now research or technical officers at the Mauritius Ministry of Blue Economy.

Despite this, Josheena says that conservation is still seen as an ‘elite’ activity. It is believed that only those whose other needs are met can afford to care about nature.

To counteract this, she recommends sponsored capacity-building training programs to create more opportunities for a wider range of people.

But once people are engaged, there are challenges to be aware of. Josheena warns that many young people can easily become overwhelmed with the weight of the world’s environmental problems, which they might feel have been left for them to resolve.

It is important they don’t feel they have to solve these problems alone. She says: “An ocean leader recently offered this tip for young people who are interested in marine conservation: self-care is ocean care. It resonated so strongly. It is very important to acknowledge that we are working on this as a team, it is not a one-person job.

“There are a lot of things that need to be done, and so young people should understand even the small contributions will add up. Mental health is not something we speak about enough. Passion is good but it is important to understand the sacrifices that come with it, and practice self-care.” 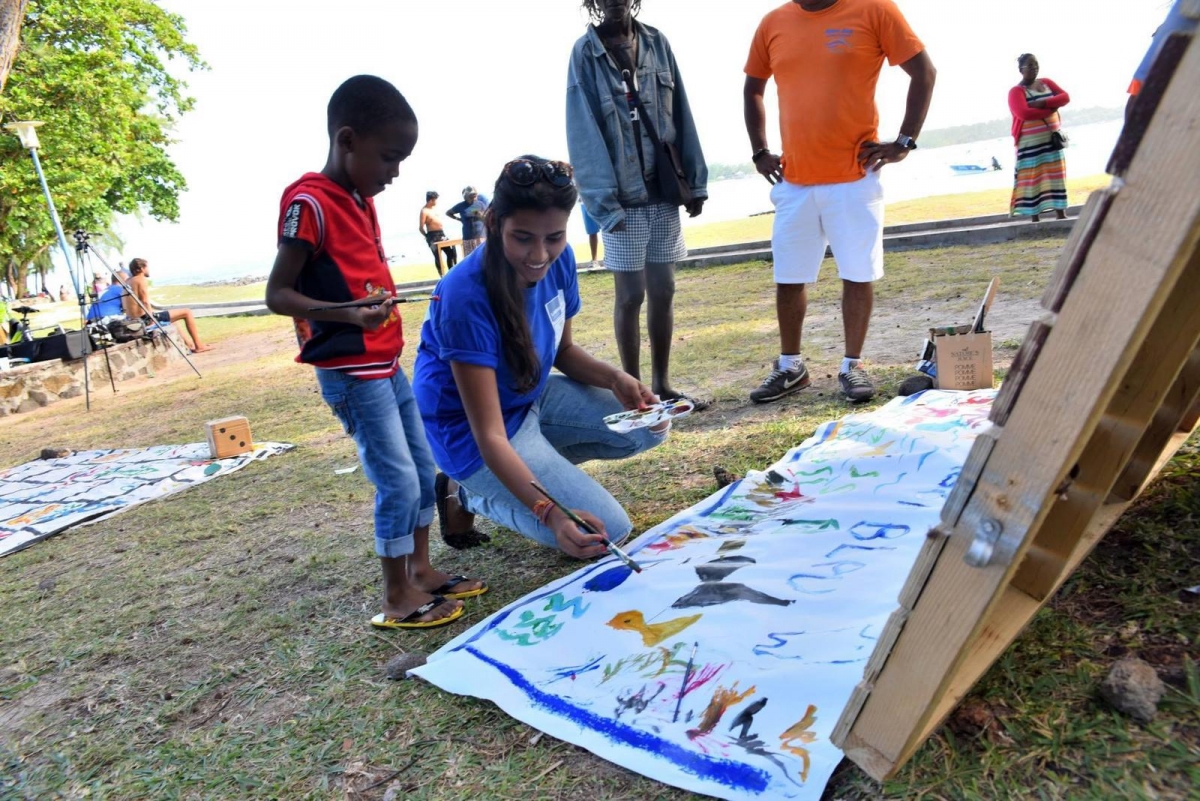 Another area Josheena has identified as key to improving conservation work is addressing the gender imbalance.

While the sector is male-dominated, early in her career, Josheena worked with many women mentors. But she highlights that classes throughout her education nearly always had more male students. She suggests women often switch to more corporate fields for greater financial independence, job security or to prioritize their care giving roles.

And while both women and men mentors have been supportive throughout her career, Josheena recalls an incident when a male co-worker told her she was only able to succeed because she was a woman. Seeing her hard work and qualifications undermined left a strong imprint in her.

“When I faced condescending moments like these earlier on, I was resolved to ensure that no one would ever question my gender, qualifications or colour again, when it comes to my work.”

“It is important to acknowledge that despite our differences, we are qualified to do these jobs. This needs to be said more clearly. It is crucial for people to whom this has happened to share their experiences.”

Women are largely underrepresented in the fisheries industry too, with only 35 women out of the 1,900 registered fishers in Mauritius. Most of these women are involved in logistics, maintenance or cleaning, all of which tend to fall under household duties – which means they get less direct support than fishermen.

“Our society is patriarchal and there is a gender disparity, especially in fisheries. When the oil spill happened, only registered fishers and those who had applied to be registered were compensated. So, all these women whose households actually depend on fish to feed their families or send their kids to school, were not directly supported in the aftermath of the oil spill.” 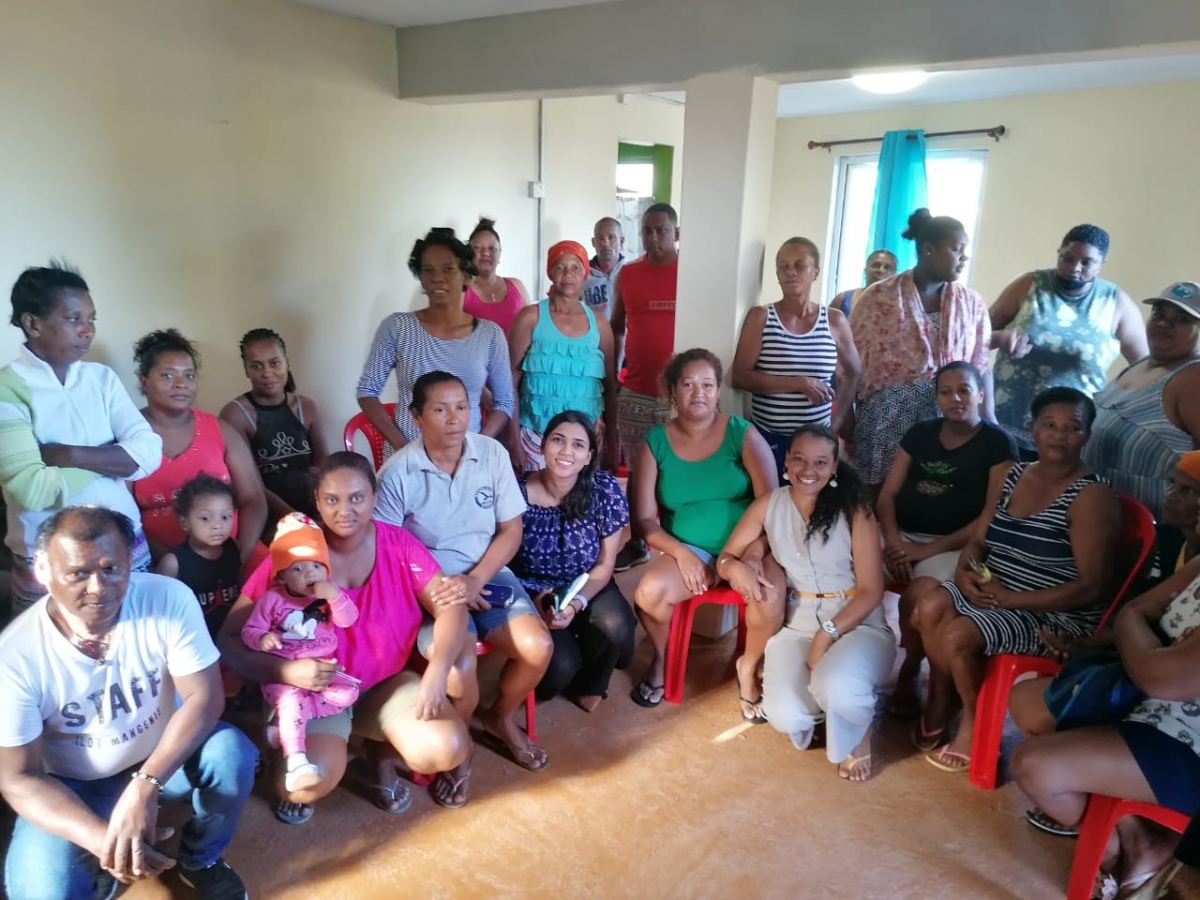 To get past this disparity and attract more women and young people to conservation efforts, Josheena reaffirms the importance of building capacity and creating “eye-opening and life-changing” training experiences that are accessible for everyone.

She believes sharing positive stories about people who are doing well will also bring more people to the field, which can be partly achieved through both educational and mentorship opportunities.

This can sometimes be as simple as raising awareness of careers in conservation, as well as the most urgent issues, to students of all ages.

Josheena shows that the path to improving access to ocean conservation is clear. We must invite everyone – regardless of their background, knowledge or location – to join the journey in creating a healthier ocean for all.

Because everyone is needed, and everyone can make a difference.

This Commonwealth Secretariat blog is part of a series launched during Youth4Climate and continuing in the lead up to COP26 and beyond, featuring young people from across the Commonwealth who are leading the way on local climate action. View the full blog series.