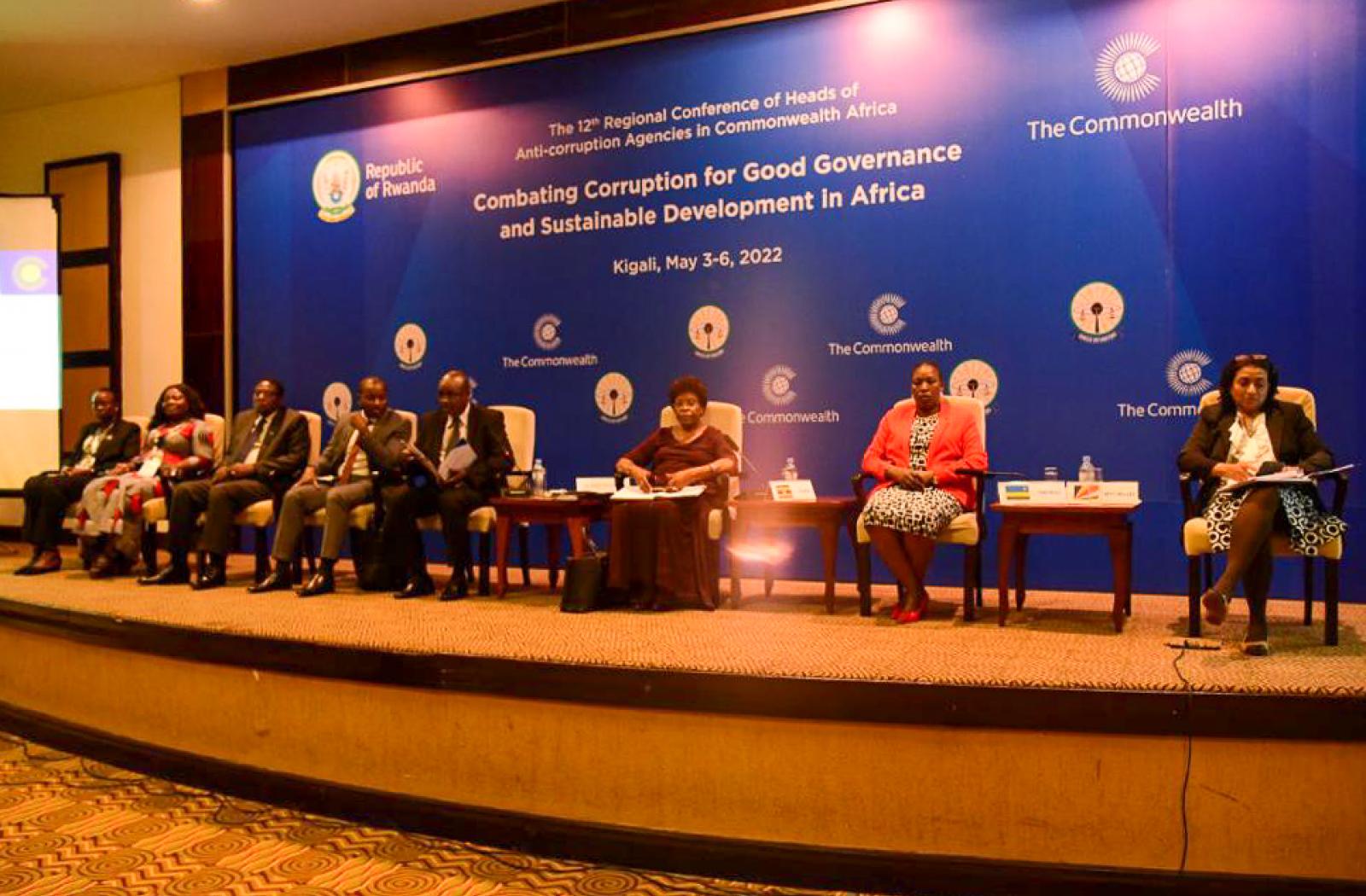 Heads of Anti-Corruption Agencies in Commonwealth Africa call for greater regional collaboration among member states in the fight against corruption.

9 May 2022 – The 12th edition of the Regional Conference of Heads of Anti-Corruption Agencies in Commonwealth Africa concluded on Friday 6 May 2022 in the Rwandan capital, Kigali, with the unanimous adoption of a communiqué which sets out a common approach to the urgent priorities of tackling corruption.

Delegates recognised that corruption continues to be a key challenge in the region with heavy losses incurred as a result of illegal transfers of proceeds of corruption and crime, and illicit financial flows out of Africa.

They agreed that corruption must be tackled more vigorously and they committed to stronger local, regional, and international cooperation and collaboration among anti-corruption agencies in Commonwealth Africa to enhance the capacity-building of investigators and prosecutors of corruption offences, and to support the speedy and unfettered repatriation of recovered assets.

Additionally, they called on governments to provide anti-corruption agencies with adequate resources to monitor, prevent, and prosecute corruption.

The four-day conference was organised by the Commonwealth Secretariat in collaboration with the Government of Rwanda and brought together Heads and Representatives of anti-corruption agencies from the Commonwealth’s 19 African member states and stakeholders. They discussed the impacts of corruption on sustainable development, strategies and innovative approaches for combating corruption through sharing knowledge, good practices and success stories, and key priorities towards the achievement of Sustainable Development Goal 16.

In her opening remarks on Tuesday, 3 May 2022, the Commonwealth Secretary-General, The Rt Hon Patricia Scotland QC, emphasized the unique bond of the Commonwealth family and the need to strengthen international cooperation and partnerships to go beyond anti-corruption agencies, tax authorities, and anti-money laundering agencies, to stamp out corruption and create “the lasting, positive space for sustainable development to thrive, and for people everywhere to flourish”.

“We can win the war against corruption through collaboration, cooperation and a Whole-of-the-Commonwealth approach [of working together; learning from each other, and collectively setting the highest possible standards] using the transformative technologies,” the Secretary-General said.

The Secretary-General also reiterated the Commonwealth Secretariat’s commitment to supporting member states act on corruption through a three-pronged approach based on research, capacity-building and strong collaboration.

Speaking at the conclusion of the conference, Dr Roger Koranteng, the Secretariat’s Adviser and Head of Public Sector Governance said:

“The challenges we face in combatting corruption call for a broad collaboration of agencies, stakeholders, and experts. So, it has been a successful four days of deliberations during which we exchanged several ideas and heard success stories on what countries are doing to prevent and stamp out corruption.  The high-level representation we had during this conference of Heads of Anti-Corruption Agencies, and key international organisations such as the World Bank, Transparency International, and the UN Office on Drugs and Crime, demonstrates the importance of such a gathering.  The global nature of corruption means that now, more than ever, we must work together to make corruption a thing of the past and build the inclusive and prosperous Africa We Want.

With the Commonwealth Heads of Government meeting around the corner, I hope the recommendations within the communique will inform discussions amongst leaders.

We thank the people and Government of Rwanda for their warm hospitality and excellent arrangements for the conference.”

Some 200 delegates, including members of the Association of Anti-Corruption Agencies in Commonwealth Africa, senior government officials, regional and international organisations, international experts, policymakers, and development partners, attended the conference which was convened under the theme ‘Combating Corruption for Good Governance and Sustainable Development in Africa’.

The conference, which has been held annually since its inception in 2011, is part of the Secretariat’s mission to help governments, judges, the police, and other public institutions tackle systemic corruption by sharing best practices, training, and policy research.

Delegates agreed that the next Africa anti-corruption conference will take place in Seychelles in 2023. They also elected Rwanda and Seychelles as the Chair and Vice-Chair, respectively, of the Association of Anti-Corruption Agencies in Commonwealth Africa.

The communiqué also called upon the Secretary-General and the Government of Rwanda to include anti-corruption measures such as prioritisation of the recovery of proceeds of crimes, artefacts, and illicit financial flows out of Africa as part of the resolutions of the Commonwealth Heads of Government Meeting (CHOGM), which is scheduled to take place in Kigali in June 2022.

In related news, the heads and representatives of Anti-Corruption Agencies from Commonwealth countries in the Caribbean will meet in St Kitts and Nevis later this month for their regional conference.

Learn more about our work in tackling corruption

About The Commonwealth Secretariat:

The Commonwealth is a voluntary association of 54 independent and equal sovereign states. Our combined population is 2.5 billion, of which more than 60 per cent is aged 29 or under. The Commonwealth Secretariat supports member countries to build democratic and inclusive institutions, strengthen governance and promote justice and human rights. Our work helps to grow economies and boost trade, deliver national resilience, empower young people, and address threats such as climate change, debt, and inequality.

For more information about The Commonwealth, visit https://thecommonwealth.org/