Recognised the United Nations as the central instrument of international co-operation for development, peace and collective security.
Image 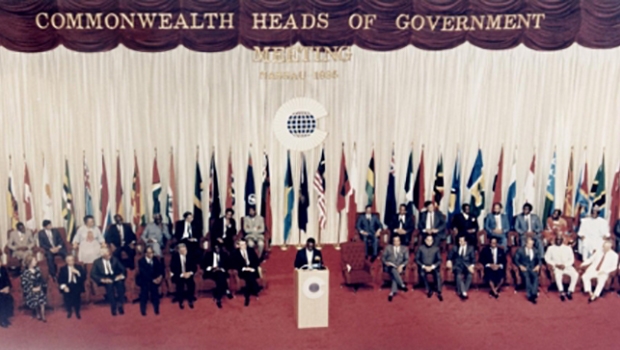 The Nassau Declaration on World Order

On the Fortieth Anniversary of the founding of the United Nations, we, the Commonwealth Heads of Government assembled at Nassau, recall to all countries and peoples the need for world order and the central importance of the United Nations system in which all should participate and from which all should benefit. In the world of today and of tomorrow, international co-operation is not an option but a necessity.

We believe that at this historic moment our world society should take stock of its considerable achievements as well as its failures, and allow hope and encouragement from the former to strengthen resolve in redressing the latter. Yet these very achievements make the more disturbing any movement away from multilateralism and internationalism, from a world aspiring to be governed by fair and open rules towards unilateral action and growing ascendance of power in all spheres: economic, political and military. We warn that a return to narrow nationalisms, both economic and political, in a climate of tension and confrontation between nations heightened by the nuclear arms race, invites again the dangers from which the world set out to rid itself at San Francisco in 1945. We issue that warning mindful that the nuclear menace imperils all peoples and nations and the very survival of our human species.

The conduct of relations between nations necessitates adherence to, and preservation of, certain accepted international norms and principles. A retreat from these norms and principles increases the threat to the sovereignty, independence, unity and territorial integrity of states. In particular, we are concerned that the world community face up to the nature and needs of small states, many of them among our membership, respond to their particular vulnerability with imagination and resolve and work to create an environment for their protection and support.

As a Commonwealth whose great majority live in poverty, we believe it imperative that the world community redouble its efforts to enlarge the prospects of social and economic advance for three-quarters of the human race. We recognise the progress achieved in developing countries in the last four decades through domestic effort and international support. However, the world must make better use of its collective resources to secure more equitable progress for all. In a global community of acknowledged and increasing interdependence between nations, which is undergoing rapid technological advance and which has the resources to meet the needs of all, the continuing disparities that divide the world’s rich and poor are a daily reminder that only partnership and collective effort and recognition of economic realities will give a fresh thrust to growth and development for all. There is thus a pressing need to renew the consensus on international co-operation for development within the United Nations system and to revitalise multilateral institutions to meet the goals of our global society for sustainable economic growth within a framework of stability.

We recognise that the United Nations and its institutions are not without imperfections, but are convinced that the solution lies not in their rejection but in their rejuvenation. Using the system effectively is as important as changing it. We therefore welcome the efforts of the United Nations Secretary-General and others to enhance the effectiveness of the world body and its capacity to prevent and resolve conflicts, and pledge to work to this end.

In the spirit of international democracy, to which we attach importance, we hope that all nations will demonstrate the desire to seek accord and the will to negotiate constructively which are crucial to the success of global institutions. We believe that the Commonwealth’s way of doing business, of seeking consensus based on equality and justice between nations, serves as an example for all.

Therefore, as leaders of the Commonwealth comprising one thousand million people and one third of the world’s nations, and mindful that obligations devolve upon us separately and collectively:

Issued at the Commonwealth Heads of Government Meeting, Nassau, The Bahamas, 16 – 22 October 1985.