Charting a course to take the Commonwealth into the next century which included a ten point pledge listing areas for priority action.
Image 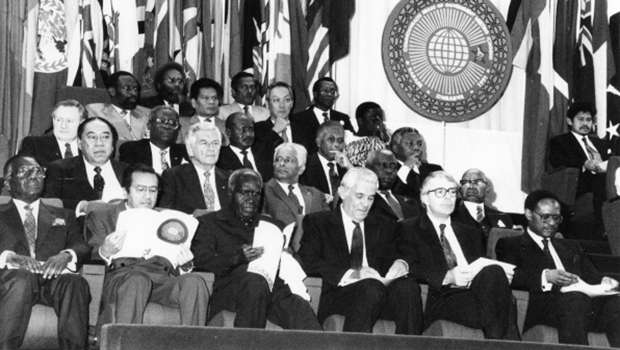 The Heads of Government of the countries of the Commonwealth, meeting in Harare, reaffirm their confidence in the Commonwealth as a voluntary association of sovereign independent states, each responsible for its own policies, consulting and co-operating in the interests of their peoples and in the promotion of international understanding and world peace.

Members of the Commonwealth include people of many different races and origins, encompass every state of economic development, and comprise a rich variety of cultures, traditions and institutions.

The special strength of the Commonwealth lies in the combination of the diversity of its members with their shared inheritance in language, culture and the rule of law. The Commonwealth way is to seek consensus through consultation and the sharing of experience. It is uniquely placed to serve as a model and as a catalyst for new forms of friendship and co-operation to all in the spirit of the Charter of the United Nations.

Its members also share a commitment to certain fundamental principles. These were set out in a Declaration of Commonwealth Principles agreed by our predecessors at their Meeting in Singapore in 1971. Those principles have stood the test of time, and we reaffirm our full and continuing commitment to them today. In particular, no less today than 20 years ago:

In Harare, our purpose has been to apply those principles in the contemporary situation as the Commonwealth prepares to face the challenges of the 1990s and beyond.

Internationally, the world is no longer locked in the iron grip of the Cold War. Totalitarianism is giving way to democracy and justice in many parts of the world. Decolonisation is largely complete. Significant changes are at last under way in South Africa. These changes, so desirable and heartening in themselves, present the world and the Commonwealth with new tasks and challenges.

In the last twenty years, several Commonwealth countries have made significant progress in economic and social development. There is increasing recognition that commitment to market principles and openness to international trade and investment can promote economic progress and improve living standards. Many Commonwealth countries are poor and face acute problems, including excessive population growth, crushing poverty, debt burdens and environmental degradation. More than half our member states are particularly vulnerable because of their very small societies.

Only sound and sustainable development can offer these millions the prospect of betterment. Achieving this will require a flow of public and private resources from the developed to the developing world, and domestic and international regimes conducive to the realisation of these goals. Development facilitates the task of tackling a range of problems which affect the whole global community such as environmental degradation, the problems of migration and refugees, the fight against communicable diseases, and drug production and trafficking.

To give weight and effectiveness to our commitments we intend to focus and improve Commonwealth co-operation in these areas. This would include strengthening the capacity of the Commonwealth to respond to requests from members for assistance in entrenching the practices of democracy, accountable administration and the rule of law.

We call on all the intergovernmental institutions of the Commonwealth to seize the opportunities presented by these challenges. We pledge ourselves to assist them to develop programmes which harness our shared historical, professional, cultural and linguistic heritage and which complement the work of other international and regional organisations.

We invite the Commonwealth Parliamentary Association and non-governmental Commonwealth organisations to play their full part in promoting these objectives, in a spirit of co-operation and mutual support.

In reaffirming the principles of the Commonwealth and in committing ourselves to pursue them in policy and action in response to the challenges of the 1990s, in areas where we believe that the Commonwealth has a distinctive contribution to offer, we the Heads of Government express our determination to renew and enhance the value and importance of the Commonwealth as an institution which can and should strengthen and enrich the lives not only of its own members and their peoples but also of the wider community of peoples of which they are a part.