Declaration of the Port of Spain, 2009

Acknowledged the key role of Commonwealth partnerships in forging a more sustainable and equitable future for all people.
Image 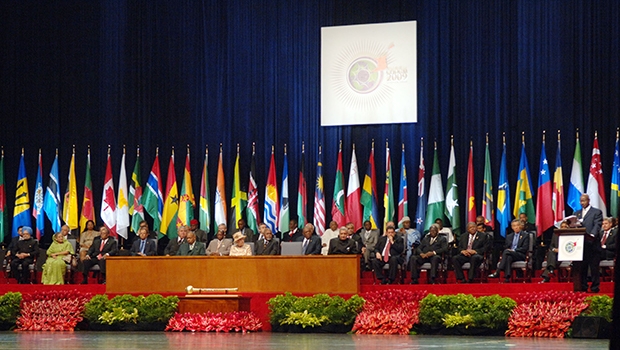 Declaration of the Port of Spain

Port of Spain, Trinidad and Tobago, 2009

We, the Heads of Government of the Commonwealth, meeting in Port of Spain, Trinidad and Tobago, from 27 to 29 November 2009, affirm the key role of partnerships in forging a more sustainable and equitable future for all people.

Our meeting takes place at a time when the world faces an unprecedented combination of social, economic and environmental challenges. These include a profound and debilitating global economic and financial crisis, volatility in key commodity prices, and the alarming impacts of climate change, which threaten the safety and livelihoods of millions. We also note with grave concern that many of the world’s poorest communities are most vulnerable to these challenges.

We recognise that challenges of this magnitude cannot be resolved by any one country alone, and that effectively addressing them will require international co-operation, sustained commitment and collective action. This calls for the strengthening of multilateral co-operation, based on mutual respect, openness and partnership. We therefore commit ourselves to deepening the Commonwealth’s existing networks of co-operation and call for a fresh impetus to foster new and more effective political and economic partnerships. We will also capitalise on the Commonwealth’s unique abilities to advocate for partnerships with other members of the international community and to promote, within each country, partnerships among the different levels of government, civil society, youth and the private sector.

This renewed emphasis on Commonwealth partnerships and collaboration should focus on areas which offer clear practical opportunities to improve lives, build more resilient communities and strengthen the bonds and ties between nations.

Protecting the poorest and most vulnerable

At our meeting in Kampala in 2007, we recognised that the Millennium Development Goals (MDGs) are designed to achieve the most fundamental transformation of humanity, including in the areas of poverty reduction, health, education and gender equality. While significant progress is being made in many countries, we remain deeply concerned that many Commonwealth countries are falling behind the MDG targets.

Noting that the global economic and financial crisis has profoundly affected both developed and developing countries and that the process of recovery is still slow and uncertain in many countries, we will collaborate to find ways to provide immediate help to the poorest and most vulnerable and to develop responses to protect the people that are most at risk, particularly those in poor developing countries.

We therefore commit ourselves to the strengthening and creation of partnerships and networks to increase development effectiveness, emphasising high-impact initiatives with clearly measurable outcomes. To this end, we pledge to take measures to improve the quality of the data used to inform policies in key areas such as health, poverty and education, strengthen the linkages between research and policy-making, and mainstream issues of gender and gender equality into policies and programmes. We will share our ideas and best practices, and deliver practical support through Commonwealth networks, including a new Commonwealth Partnership Platform Portal. We urge a stronger role for the Commonwealth Secretariat in assisting developing country members to access and utilise the resources available to cope with the economic crisis. We will also strive to implement the recommendations of the High-level Report on Democracy and Pro-Poor Growth as well as those of the Report of the Commission on Growth and Development.

At our meeting in Kampala in 2007 we expressed concern that many countries were still weighed down by large and unsustainable debt burdens, and we reiterated the need to address the debt problems of middle-income countries, given the increasing share of government revenue taken by debt servicing and the implications for social spending.

In this regard, we commend the World Bank Debt Management initiative, which was developed in partnership with the Secretariat, and which was designed to help the governments of low-income and highly indebted middle-income countries to manage their national debts.

We call on the international financial institutions to provide new and enhanced funding windows for concessionary financing for middle- income countries with serious debt burdens.

In keeping with the calls made by Finance Ministers at the Commonwealth Ministerial Debt Sustainability Forum, we also call on donor countries to honour their bilateral commitments with respect to the promised aid levels and cancellation of debt.

We will restore business confidence, the basis for investment and growth, by promoting the implementation of sound macroeconomic policies, including open, competitive markets with efficient and transparent regulation, good governance, and prudent and accountable management of public and private funds.

We also give our full support to the process of reform of international financial institutions and call for the urgent and comprehensive implementation of reform that responds to the needs of all countries. We should also seek to create mechanisms within established institutions that can assist small and vulnerable states.

We recognise that many Commonwealth countries already collaborate on innovation, particularly in key areas such as information and communication technology (ICT). We believe that there must now be a far stronger emphasis on science, technology and innovation (STI) as key drivers of the type of economic transformation, employment

generation and growth that will be required to emerge from the present economic crisis, attain our development objectives and realise our collective vision of sustainable development.

We therefore commit to promote increased investment in STI, as well as the rapid dissemination of technologies and ideas. In this regard, we request the Secretariat to identify, in collaboration with the Commonwealth Business Council (CBC), mechanisms for financing research to advance the development and adoption of new technologies and to assist member countries to access the environmental development funds managed by the World Bank and the UN.

In addition, we will encourage new public–private sector partnerships, foster the expansion of the small and medium-sized enterprise (SME) sector and promote new knowledge-based and creative industries.

As we seek to strengthen the CHOGM process, we recognise that a more co-ordinated, integrated and coherent approach to implementation of the decisions reached at CHOGMs is needed, alongside strategies to ensure the sustainability of collective Commonwealth planning and action.

The global role of the Commonwealth

The Commonwealth is a platform for its membership to communicate, share ideas and co-ordinate action across large geographical and cultural distances. It can therefore generate and sustain effective international action on global challenges. As a result of its diversity and representativeness, the Commonwealth can strengthen old partnerships and forge new ones in order to play a leadership role in the international arena for the promotion of a more equitable and sustainable future for all, and particularly to work as an advocate for small and vulnerable states. Together, we pledge to act as a catalyst for positive change in the international community in these challenging times.

Issued at the Commonwealth Heads of Government Meeting, Port of Spain, Trinidad and Tobago, 27 – 29 November, 2009.