An Inclusive Commonwealth: the voices of young people 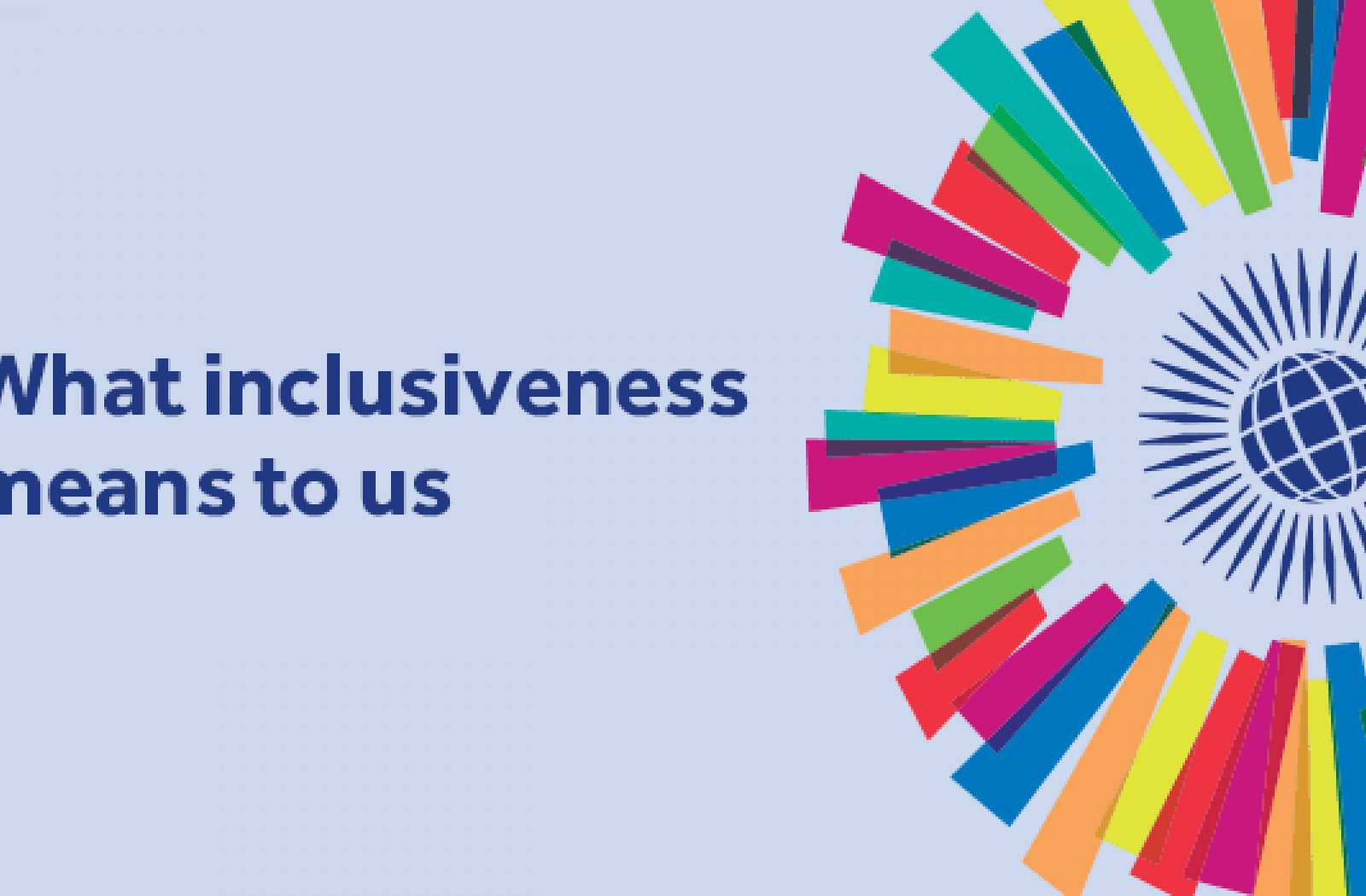 Young people say what ‘An Inclusive Commonwealth’, our theme for 2016, means to them.

We asked young people aged under 30 across our member countries to explain what ‘An Inclusive Commonwealth’, our theme for 2016, means to them.

For some, it is about being part of a community of nations where each and every citizen enjoys freedom, success and can live a dignified life, while for others the theme represents a call to action to tackle some of the world’s greatest challenges such as climate change and human rights.

What does ‘An Inclusive Commonwealth’ mean to you? Join the debate online using the hashtag #InclusiveCommonwealth.

“An inclusive Commonwealth transcends borders. It is a community built, yes, on history but is also a lasting legacy of togetherness, based on shared experiences, and hope for the future to retain such strong bonds.”
Jamaica - Tamara McKayle

“An inclusive Commonwealth refers to the values of tolerance, respect and understanding. This is set out in the Commonwealth Charter where the richness of the Commonwealth is a family of nations in which each member state is valued equally.”
Canada - Harnoor Gill

“Inclusivity is a significant theme to reflect on. Every Commonwealth nation is defined by its premise of inclusion. The notion of solidarity, outlined in the Commonwealth Charter, includes values that have become sleepy in the public square. Young people can and should awaken those values this year.”
Nigeria - Nnadozie Onyekuru

“The Commonwealth is the only platform where people can share their thoughts - even their most personal thoughts - to all over the world. It never restricts you in framing your ideas in front of global audiences.”
Pakistan - Zainab Shamim Potrick

“Singapore is the epitome of what it means to be a member of an inclusive Commonwealth. Races and religions live closely and together with one another in harmony. Now, as a Singaporean living in Australia, the strong sense of community is not lost on me. Anywhere I go, it seems, there are pieces of home.”
Singapore - Janine Wan

“An inclusive Commonwealth is about bridging the gap between member states and creating methods of globalisation and development in particular, which positively affects all of us. It is about developing plans to impact not only those individuals directly linked to organisations, political bodies and people of influence - but also ordinary everyday people.”
Mozambique - Denise Juvane

“An inclusive Commonwealth is the overarching theme of Commonwealth Day 2016 and its relevancy speaks to the reality of strength in numbers and what can be accomplished as a united force. Let us not sit on our laurels - this is only the beginning for our work to be intensified.”
Barbados - Lyn-Marie Blackman

“I see an inclusive Commonwealth as one where each and every citizen has full freedom, success and opportunities to live a dignified life of their own. We are united and the Commonwealth shows that love, strength, and commitment to the welfare of citizens with a shared global humanity has been our motto.”
India - Abhilash Borah

“An inclusive Commonwealth implies a healthy synergy among member countries. ‘One size does not fit all’ so individual uniqueness of members must be preserved while celebrating unity in diversity.”
Ghana - Nutifafa Geh

“The Commonwealth celebrates uniqueness in culture, politics, and a shared history with the United Kingdom. It enshrines a diverse range of languages, ideas of democracy and individual freedoms. I actively promote these ideas and values through numerous voluntary roles and blog as a Commonwealth Correspondent. The Commonwealth is an eternally positive global concept.”
Bangladesh - Osmi Anannya

“This year’s theme, ‘An Inclusive Commonwealth’, is simple yet powerful. It is a call for mutual cooperation as we move forward in tackling some of today’s greatest challenges such as climate change and human rights.”
Jamaica - Rashaun Watson

“Through the realisation of the Commonwealth’s mandate, youth can better promote the ideals of inclusiveness by sharing helpful knowledge with youth friends, families and community members.”
Nigeria - Tayo Elegbede

“An inclusive Commonwealth is about being given a platform to participate regardless of who are you are or where you’ve come from and to be considered as a significant member of a community.”
Zambia - Mercy Zulu

“An inclusive Commonwealth means every nation has an equal platform to participate. Diversity is celebrated. People from different walks of life have a say in their collective future. Traditionally excluded demographic groups such youth, have found a great platform at the Commonwealth not only to participate but also to influence decision making.”
Kenya - Amina Adhan

“Today, I stand with the words of Nelson Mandela, 'The Commonwealth makes the world safe for diversity'. It is a united family of countries having the systems of equity, understanding and tolerance in practice. This is what an inclusive Commonwealth means to me - this is what it reflects.”
Nigeria - Oghenkevwe Oghenechovwen

“One of the wonders of the Commonwealth is its special work as a champion for the vulnerable - both for the young people and small states. Coming from a small island like Cyprus, the support and wide array of possibilities given by the Commonwealth to the island state, stands as one of the most tangible examples of the organisation’s inclusiveness.”
Cyprus - Christine Shahbenderian

“An inclusive Commonwealth is a community that takes into account all the interest and contributions of its people with an aim of improving their quality of life in all aspects. I believe the Commonwealth is inclusive because it gives voice to the minorities and vulnerable in the society.”
Kenya - Judith Akoth

“An inclusive Commonwealth is a global society of people united together beyond borderless horizons as a force to contribute towards the betterment of mankind as a whole. Curiosity within the mind-set of the Commonwealth people are how I see the Commonwealth can be inclusive.”
Malaysia - Muhammad Hafiz

“An inclusive Commonwealth to me is about creating a sense of belonging amongst citizens of different countries in the Commonwealth about how much we share, common hopes, common dreams - a bond which would not break.”
Cameroon - Alphonse Akouyu

“An inclusive Commonwealth is where each person living in a Commonwealth country rises up to believe in, and lives a life beyond domination, discrimination, deprivation and degradation. They become more tolerant and do not differentiate between people on the basis of gender, caste, status, abilities, religion or colour.”
India - Ishan Agarwal

“An inclusive Commonwealth represents a movement that supports governments, civil society and the private sector to make significant progress towards achieving national and global aspirations, particularly the Global Goals underpinned by the principles of mutual respect and global solidarity.”
Nigeria - Biodun Awosusi

“If you looking are looking for a platform where developed and developing countries, including small islands can all share in an open and supportive forum of trade and development, then the Commonwealth is for you!”
Cameroon - Carole Nyemeck

“An inclusive Commonwealth is the space whew everybody has equal opportunities to achieve their dreams irrespective of religion, race, ideology, how they are or who they choose to be.”
Nigeria - Musa Temidayo

“I envision ‘An Inclusive Commonwealth’ where similarities enrich us and differences don’t hinder tolerance, respect and understanding. My experience as a Commonwealth scholar encouraged me to respect diversity.”
Barbados - Renice Bostic

“In a world where inequality and instability are increasing, it is the Commonwealth's approach to including every small and big nation together, a genuine understanding of equal rights, and giving fair value and respect to each individual that makes the Commonwealth inclusive for me.”
India - Mridul Upadhyay

“Like you, my date of birth, my national identity, and the orientation of my sexuality, influences my uniqueness.  In my inclusive Commonwealth, such diversity is celebrated, participation and equal opportunities facilitated, and accessibility created.”
Trinidad and Tobago - Khadija Holder

“Though different in culture, Commonwealth nations share similar political systems. An inclusive Commonwealth would not just rely on our commonalities but on our differences as well, so as to create dynamism and diversity.”
Singapore - Kevin Tan

An inclusive Commonwealth echoes the timeless yearning of civilizations across centuries and geographies to resist both accidental and chosen human identities like race, gender, nationality, creed, status of wealth, physical condition and sexual orientation, as barriers to mutual understanding and cooperation.
Ghana - Michael Gyekye

“The Commonwealth stands as a recognition of unity and cooperation among member states and the participation of the youthful constituents in various countries, alongside the old. The youthfulness and vitality that motivates our collective endeavours can be seen by increased participation in governance, leadership and the democratic process.”
Kenya - Brian Dan Migowe

“Despite our differences in size, age, faith, physical appearances or political creed, we, as citizens of the Commonwealth, are recognised as equal and valued in the Commonwealth. As a chairperson for inclusion and engagement, I am motivated to ensure that the voices of all 1.2 billion youth can be heard.”
Seychelles - Angelique Pouponneau

There are more than 1.2 billion people under the age of 30 in the Commonwealth. In some of our member countries, particularly in Africa, the youth demographic rises to 70 per cent. Young people are making a difference every day in all fields of work and as leaders in their communities.

For over four decades the Commonwealth Youth Programme has provided assistance to governments in developing and implementing youth-focused policies and programmes. Our work has helped to enhance the status of young people across the Commonwealth, by recognising their contribution and providing platforms to share their concerns and ideas. Find out about our work