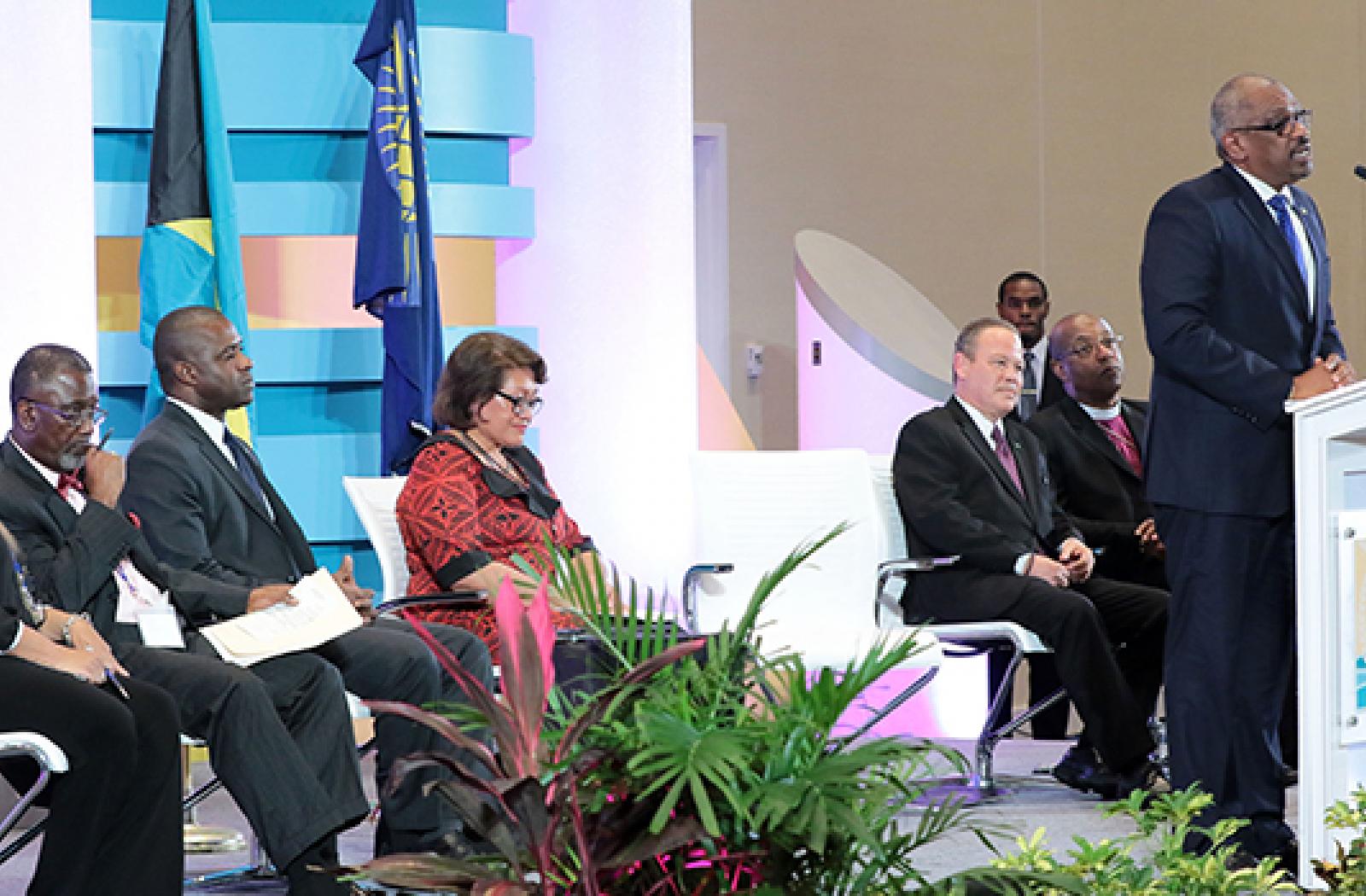 The Commonwealth Secretariat has been praised for strong initiatives to promote and protect justice as attorneys-general, law ministers and senior law officials began their summit in The Bahamas today.

The Commonwealth Secretariat has been praised for strong initiatives to promote and protect justice as attorneys-general, law ministers and senior law officials began their summit in The Bahamas today.

Speaking at the opening of the Commonwealth Law Ministers Meeting (CLMM), attorney-general of The Bahamas, Carl Bethel, welcomed the recently launched Commonwealth Office for Civil and Criminal Justice Reform (OCCJR), which provides technical assistance and an online platform with best practice guides, model laws, standards, templates and legal insight on climate change, human rights and a range of other issues.

Pledging the full support of The Bahamas for the 52-Member intergovernmental organisation, Prime Minister Hubert Minnis said, “The work of the Secretariat in producing the revised common law legal systems model provisions on monetary laundering, terrorist financing, preventive measures and the proceeds of crime is to be commended.”

Earlier in the day senior officials met to review and adopt the CLMM agenda for the meeting.

Focusing on the CLMM theme, ‘Strengthening the rule of law through technology’, Dr Minnis said, “The need for the immigration of ICT platforms to improve the administration of justice may be greatest in the smaller developing or emerging states, which may be least able to afford them.”

He added, “It is my hope also that the more developed countries help provide technical and tangible support to our smaller member states who are struggling to keep up, or who are well behind in the use of technology in improving their justice systems through the use of ICT.”

Delivering an address on behalf of Secretary-General Patricia Scotland, director of the Secretariat’s Governance and Peace Directorate, Katalaina Sapolu, also stressed the importance of technology in opening up “broad new horizons of opportunity, with greater efficiency, accountability and transparency.”

The Secretary-General’s address highlighted the importance of legislations in implementing international and national commitments to limit the rise of global temperatures and address climate change.

Commending senior law officials for their foresight to put climate change and natural disaster management on the law ministers meeting agenda, the address said, “We are deeply conscious of the tragic and distressing events in the region over recent weeks when Hurricanes Irma and Maria wrought such destruction and disruption. Law may not be the first area that we think of in relation to climate change, yet legislation is critical if there is to be effective implementation of the Paris Agreement.”

National laws, it added, play an important role in helping countries to move to economies which protect natural resources and are built on low or zero carbon production.

Commonwealth initiatives such as the Law and Climate Change Toolkit, to be launched at COP23 in Bonn, it said, will help guide and support member countries in reviewing and strengthening national laws. A beta version of the toolkit on ‘Overarching Climate Change Laws’ and ‘Energy Laws’ will be launched during COP23 next month.

Referencing the 2018 Commonwealth Heads of Government Meeting (CHOGM) theme, Secretary-General Scotland urged delegates to “seize the potential and opportunity of Commonwealth connection, and build a fairer, more equitable, sustainable, inclusive and prosperous future for all.”