In one of the largest training programmes of its kind, close to 600 senior Government officials and decision-makers from across the Commonwealth completed the Advanced Online Training in Government Performance Management course.

In one of the largest training programmes of its kind, close to 600 senior Government officials and decision-makers from across the Commonwealth completed the Advanced Online Training in Government Performance Management course.

The Commonwealth Secretariat's Public Sector Governance Unit (PSGU) under the Governance and Peace Directorate (GPD) offered several rounds of the course. Four editions of regional programmes offered during January and March 2021, covered Africa & Europe. Asia, Pacific, the Caribbean, and the Americas. In addition, two in-country editions were held in Barbados during April and May 2021.

In her address during an inaugural session in Barbados, the Honourable Prime Minister Mia Amor Mottley QC MP said:

"Services must come to the people as opposed to people coming to the services. That is why government performance management is so important". She also stated that she hoped the Commonwealth Secretariat training would give the participants a global perspective, equipping them with the skills required to deliver what people want and need. 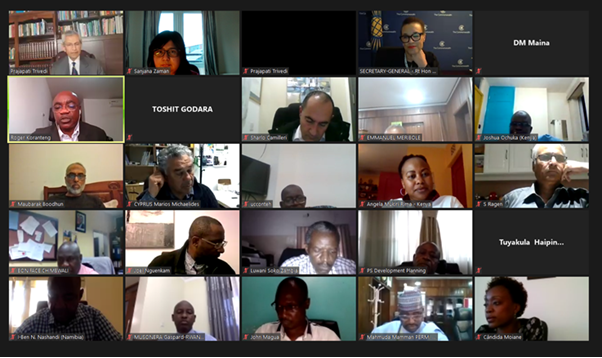 Africa and Europe Edition of the training.

Positive feedback from the participants included:

Dr Luis Franceschi, Senior Director, Governance and Peace Directorate said, "Going forward, we hope that the participants will trigger the change towards better government performance management practices and new ways of governance in their respective countries."

Some outcomes from the training include:

The Secretary-General of the Commonwealth, Rt Honourable Baroness Patricia Scotland QC, encouraged Commonwealth countries to find a consensus on Generally Accepted Performance Principles (GAPP). There is an emerging consensus on some of these principles and the outcome in this regard was presented by four regional panels representing training programme alumni at the Annual Meetings of the American Society for Public Administration (ASPA).

Secretary-General Scotland participated in the closing, and award ceremonies of all editions of the training. In her address, she gave heartfelt thanks to the participants not only for coming together and agreeing on GAPP principles but also for what they will achieve in future by implementing them. She encouraged participants to maintain the momentum rekindled through the training, and channel it into the Community of Practice. Secretary-General Scotland emphasized that the Commonwealth Secretariat will always be an enthusiastic and willing partner to countries as they improve their performance management systems.