Cameroonian named as Commonwealth Young Person of the Year 2016 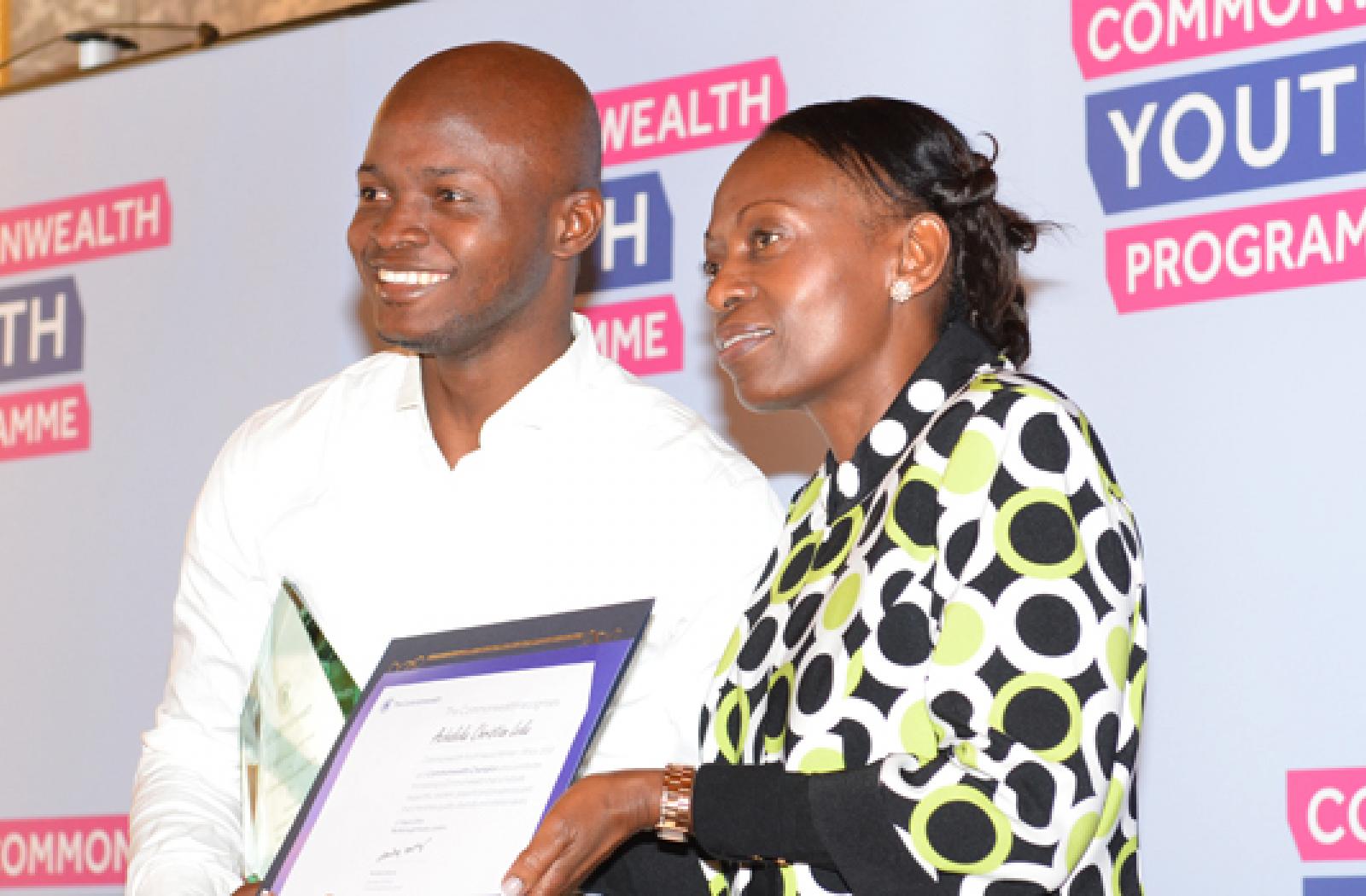 The Commonwealth Young Person of the Year has been named as Achaleke Christian Leke from Cameroon.

The Commonwealth Young Person of the Year has been named as Achaleke Christian Leke from Cameroon - one of four outstanding young people aged under 30 recognised in the 2016 Commonwealth Youth Awards for Excellence in Development Work.

The young peace activist serves as the National Coordinator of Local Youth Corner Cameroon, a youth-led organisation promoting peace and countering violent extremism. On learning of his award win, Achaleke, aged 25, said: “I represent young people across Africa. Recognition and support to the work of young people remains a major challenge we face every day in our activities. This award recognises and supports the role of young people in peace building and the fight against violent extremism.”

“This Commonwealth award will go a long way to amplify and create more awareness of our current peace building work with young people, street children, and youth in correction centres and prisons in Cameroon. I am sure this will inspire many young people to engage in the peace building process. We are ambassadors of peace and not agents of violence.”

Achaleke was awarded overall winner of the 2016 Commonwealth Youth Awards for Excellence in Development Work and also regional winner for Africa at a ceremony at the Commonwealth’s headquarters in London, Marlborough House on 17 March. Three other regional awards recipients were named as Commonwealth Young Persons of the Year for Asia, Caribbean and Americas and Pacific: Ms Shougat Nazbin Khan from Bangladesh (Asia), Ms Shamoy Hajare from Jamaica (Caribbean and the Americas) and Mr Bal Kama from Papua New Guinea (Pacific).

The awards recognise outstanding young people from Commonwealth countries whose work has significantly contributed to local, national, regional or global development. Over 300 nominations were received this year and 17 finalists were named in January.

Commonwealth Secretary-General Kamalesh Sharma said: “Recognising young people’s contributions to nation building is immensely important, and has long been a distinctive feature of our Commonwealth approach. Communities become more cohesive and inclusive, and social and economic development more sustainable and equitable, when the concerns and invaluable work of young people are integrated fully into public thinking, policy and action.”

“The Commonwealth Youth Awards are a celebration of remarkable contributions made by exemplary Commonwealth citizens – those at the forefront of building better societies. These young award winners are pioneering champions of Commonwealth values, and their practical example makes them inspiring advocates for the principles of the Commonwealth Charter,” he added.

The judging panel for the awards included representatives of High Commissions, Commonwealth organisations and young leaders. In addition to a cash prize and a trophy, the four winners were given an all-expenses paid trip to London to meet Commonwealth leaders.

Katherine Ellis, Director of Youth at the Commonwealth Secretariat, stated: “These awards showcase outstanding contributions from young Commonwealth citizens, demonstrating young people’s talents and commitment to leaders and policy-makers, and inspiring other young people. The efforts of such young people are crucial to the Sustainable Development Goals, as their innovative and inspiring work results in action and change.” 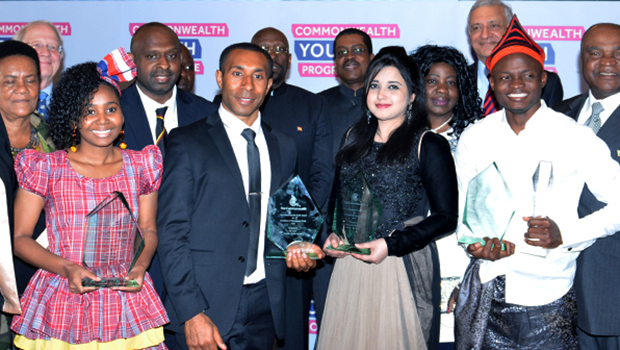 Achaleke is a peace activist who serves as the National Coordinator of Local Youth Corner Cameroon, a youth-led organisation promoting peace and countering violent extremism. Over 5,000 young Cameroonians have benefitted from its youth empowerment programmes on ideals of peace building, countering violent extremism, leadership development, and national integration. He has organised over 40 different youth empowerment and advocacy training workshops across Cameroon and worked closely with the Cameroon National Youth Council.

Achaleke has leveraged his huge following on social media to spearhead a culture of peace, and influenced dialogue among young people on opportunities to be peacebuilders. He has shared good practices and emerging trends and success stories of youth leadership in the areas of peacebuilding and countering violent extremism, training over 2,000 young people with a manual he designed.

Bal is founder and director of Kama Scholars Foundation, a grassroots initiative that empowers disadvantaged young people. The initiative works in the Gumine District in the Simbu Province of Papua New Guinea, a population of 42,000 people. It provides scholarships for schoolchildren in remote villages and advocates education for young girls, conducts health awareness on hygiene and lifestyle, and empowers disadvantaged youths to escape drugs, crimes and other social challenges.

Since 2015, the campaign has provided 56 scholarships to young people from remote villages who are all currently undertaking studies in high schools. This has been critical in alleviating the cost of education on their parents and allowing students to concentrate on their studies and organised volunteer placements for Australian medical students in local communities. Bal’s work has been instrumental in creating opportunities for children, young people and community members, including socially marginalised groups, through programmes that promote inclusivity and empowerment in education, health and justice throughout Papua New Guinea.

Bal said: “It’s a great privilege to be receiving this award from the Commonwealth Secretariat. I want to acknowledge the many other young people in the Pacific who also initiate positive change in disadvantaged but resilient communities. Attempting to address injustice and inequality – in a sustainable and culturally sensitive way – has its challenges. Because of this, I’m grateful and inspired by people who support programmes like Kama Scholars Foundation.”

“Issues of social justice, good governance and climate change are some of the big challenges for states across the Pacific. I hope to see Kama Scholars Foundation partner with other change agents to address some of these issues, especially at the grassroots level. With more support, I believe we can work towards a truly inclusive society in our aspiration for an inclusive Commonwealth.”

Shougat is an education advocate who founded the H.A. Digital School and College, which uses innovative digital technology to engage its 300 registered students from rural and poor families. Having identified that unaffordable school expenses was the main reason given by parents for children dropping out of schools, she founded the educational institute targeting rural children to provide an advanced education system with minimal costs.

Shougat started raising funds in 2011 in order to construct the school in the remote area of Tarakanda, Bangladesh. H.A. Digital School and college has worked to reduce costs for families with financial difficulties and offers free study materials, clothing and transportation. Qualified teachers are hired on a part time basis to travel to rural areas and the school also offers free English language and technical training to local full time teachers to improve teaching standards using digital materials.

Shoughat said: “Quality education needs to be given to everybody despite a lack of funds and resources. Visionary education reform requires modernising classroom environments and restructuring learning tools. H. A. Digital School and College offers innovative education using information and communication technologies. It is a great honour to have all my hard work recognised and regarded favourably by the Commonwealth. This award is a true source of motivation which will continue to stimulate me to seek excellence in the work I am doing.”

The school assists youth-led organisations to transform projects into programmes through the adoption of a social enterprise model. Since its inception, Shamoy has implemented programmes such as Building Resilient Youth Clubs and Youth Social Entrepreneurship 101. She has carried out initiatives such as the Jamaica Sustainable Development Project, JSSE’s Hydroponic Programme, Caribbean Youth Speak Up campaign, the Junction Development Area Rainwater Harvesting project and the Young Changemakers Summer Camp. Shamoy is also the co-founder of the Youth Entrepreneurship Project, which was created to encourage youth entrepreneurship in Mandeville, Jamaica

Shamoy said: “Thank you Commonwealth Secretariat for the continued recognition and support of young people across the Commonwealth of Nations. Today I accept this award on behalf of young entrepreneurs, recognising their resilience and contribution to sustainable development. Having experienced first-hand the feelings of despair and hopelessness as a result of once being unemployed, I understand the importance of shifting your focus from being a job seeker to a job creator. Commonwealth youth: we are 1.2 billion strong with many unique talents and bright ideas. It is our responsibility to work together in order to make the Commonwealth more resilient.”

Photos, video interviews and footage from the awards are available on request by contacting [email protected]