Adoption of a Commonwealth action programme to fulfil more effectively the commitments in the Harare Declaration.
Image 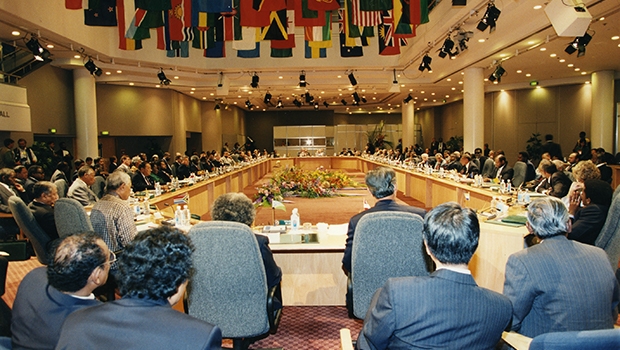 At Harare in 1991, we pledged to work for the protection and promotion of the fundamental political values of the association, namely democracy, democratic processes and institutions which reflect national circumstances, fundamental human rights, the rule of law and the independence of the judiciary, and just and honest government. We agreed at the same time to work for the promotion of socio-economic development, recognising its high priority for most Commonwealth countries. During our Retreat at Millbrook, we decided to adopt a Commonwealth Action Programme to fulfil more effectively the commitments contained in the Harare Commonwealth Declaration. This Programme is in three parts:

A . Measures in Support of Processes and Institutions for the Practice of the Harare Principles

The Secretariat should enhance its capacity to provide advice, training and other forms of technical assistance to governments in promoting the Commonwealth’s fundamental political values, including:

B . Measures in Response to Violations of the Harare Principles

Where a member country is perceived to be clearly in violation of the Harare Commonwealth Declaration, and particularly in the event of an unconstitutional overthrow of a democratically elected government, appropriate steps should be taken to express the collective concern of Commonwealth countries and to encourage the restoration of democracy within a reasonable time frame. These include:

C . Mechanism for Implementation of Measures

We have decided to establish a Commonwealth Ministerial Action Group on the Harare Declaration in order to deal with serious or persistent violations of the principles contained in that Declaration. The Group will be convened by the Secretary-General and will comprise the Foreign Ministers of eight countries*, supplemented as appropriate by one or two additional ministerial representatives from the region concerned. It will be the Group’s task to assess the nature of the infringement and recommend measures for collective Commonwealth action aimed at the speedy restoration of democracy and constitutional rule.

The composition, terms of reference and operation of the Group will be reviewed by us every two years.

We reaffirmed our view that the Commonwealth should continue to be a source of help in promoting development and literacy and in eradicating poverty, particularly as these bear on women and children. With a view to enhancing its capacity in this area, we agreed on the following steps:

We were convinced that the Commonwealth, with its global reach and unique experience of consensus building, was in a position to assist the wider international community in building bridges across traditional international divides of opinion on particular issues. We therefore agreed that there was scope for the association to play a greater role in the search for consensus on global issues, through: