Asserted the promotion of peace, disarmament and the resolution of disputes through negotiation in response to the readiness of nations to resort to the illegal use of force.
Image 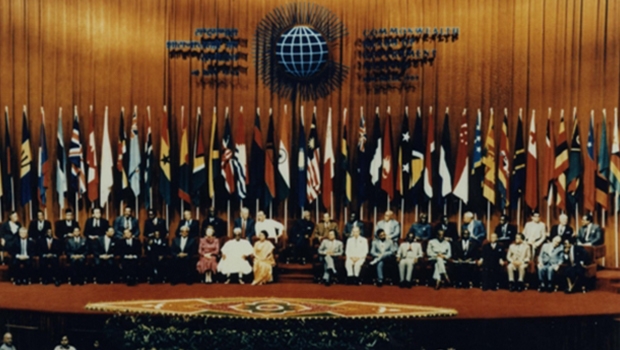 As we meet together in India at the end of 1983, representing a quarter of the world’s people from every continent and many regions, we have shared both our concerns and our hopes for international security. Despite differences of approach which affect the way we analyse and judge events, it is our perception that relationships between the world’s major military alliances are in danger of becoming more confrontational. In the context of heightened tensions and a continuing build-up of nuclear arsenals, the future of civilisation as we know it could be threatened. None of our countries or peoples would be insulated from that fate.

We are alarmed by increasing disregard for the moral and legal principles which should govern the conduct of states; by the degree to which the ethic of peaceful settlement of disputes is being eroded and by the readiness of nations to resort to the illegal use of force.

At this time of crisis, we believe it to be imperative that the Soviet Union and the United States should summon up the political vision of a world in which their nations can live in peace. Their first objective must be to work for the resumption of a genuine political dialogue between themselves leading to a relaxation of tensions. We believe that Commonwealth governments can make a practical contribution in encouraging them to do so and in promoting a larger measure of international understanding than now exists.

Essential to that enlargement of understanding is the need to increase contacts at a variety of levels between the governments and peoples of East and West. A concerted effort is required to restore constructive dialogue to the conduct of East-West relations. Only thus can a climate of confidence be rebuilt in place of the prevailing one of fear and mistrust.

In all these pursuits we emphasise the supreme importance of political will. We therefore welcome Prime Minister Pierre Trudeau’s call for a new political dimension in the quest for international security. We support his efforts to restore active political contact and communication among all the nuclear weapon powers, and are willing to help these and other such efforts in all appropriate ways.

As Prime Minister Indira Gandhi has so consistently emphasised, the central issue in securing wider progress on disarmament is the stopping of the nuclear arms race. These are essential steps for progress in working towards a world released from the menace of nuclear weapons and their wider spread. If the resources released by disarmament were ploughed back in some measure into world development, the needs of the developing countries which are in the forefront of our concern could be significantly met.

We are concerned also over the diminishing capacity of international institutions to play an effective role in world affairs. Rejecting this negative trend, we pledge our renewed support for the principles enshrined in the United Nations Charter. There is, in our view, an urgent need to consider what practical steps can be taken to strengthen the United Nations system and to improve its capacity to fulfil the objectives of the Charter.

We are particularly concerned at the vulnerability of small states to external attack and interference in their affairs. These countries are members of the international community which must respect their independence and, at the very least, has a moral obligation to provide effectively for their territorial integrity. We have separately agreed on an urgent study of these issues. Additionally, however, we will play our part in helping the international community to make an appropriate response to the UN Secretary-General’s call for a strengthening of collective security in keeping with the Charter.

Meeting here in India, we cannot emphasise too strongly our belief that an ethic of non-violence must be at the heart of all efforts to ensure peace and harmony in the world. That ethic requires dose adherence to the principle of peaceful settlement. Only by such a commitment on all sides will the world’s people enjoy an environment of true international security.

Finally, we retain faith in human capacity to overcome the dangers and difficulties that threaten the world and to secure for all its people the prospect of a more peaceful international environment. We shall work together to fulfill that faith.