Declaration on channelling the forces of globalisation towards the elimination of poverty and the empowerment of human beings.
Image 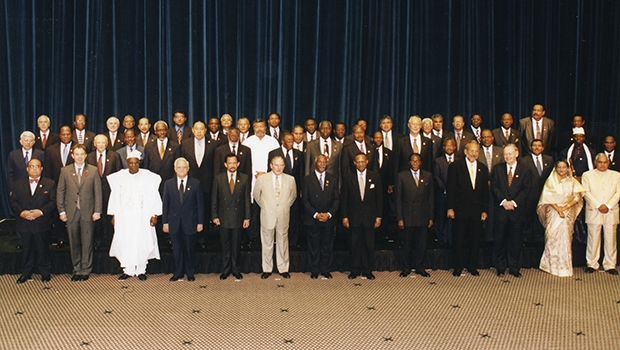 In today’s world, no country is untouched by the forces of globalisation. Our destinies are linked together as never before. The challenge is to seize the opportunities opened up by globalisation while minimising its risks.

On the positive side, globalisation is creating unprecedented opportunities for wealth creation and for the betterment of the human condition. Reduced barriers to trade and enhanced capital flows are fuelling economic growth.

The revolution in communications technologies is shrinking the distance between nations, providing new opportunities for the transfer of knowledge and the development of skills-based industries. And technological advance globally offers great potential for the eradication of poverty.

But the benefits of globalisation are not shared equitably. Prosperity remains the preserve of the few. Despite the progress of the past fifty years, half the world’s population lives on less than two US dollars per day. Many millions live in conditions of extreme deprivation. The poor are being marginalised. Expanded capital flows have also brought with them the risk of greater financial instability, undermining the hope that a commitment to open markets can lift the developing world, especially the least developed countries, out of poverty and debt.

The persistence of poverty and human deprivation diminishes us all. It also makes global peace and security fragile, limits the growth of markets, and forces millions to migrate in search of a better life. It constitutes a deep and fundamental structural flaw in the world economy.

The greatest challenge therefore facing us today is how to channel the forces of globalisation for the elimination of poverty and the empowerment of human beings to lead fulfilling lives.

The solution does not lie in abandoning a commitment to market principles or in wishing away the powerful forces of technological change. Globalisation is a reality and can only increase in its impact. But if the benefits of globalisation are to be shared more widely, there must be greater equity for countries in global markets.

We call on all nations fully to implement the Uruguay Round commitments to dismantle barriers to trade for the mutual benefit of all. Moreover, recognising in particular the significant contribution that enhanced export opportunities can make for reducing poverty, we call for improved market access for the exports of all countries, particularly developing countries, and the removal of all barriers to the exports of the least developed countries.

Strong export growth remains a key element in the ability of developing countries to improve their living standards to the levels enjoyed in the industrialised world. We support efforts that would enable developing countries to build up their skills and manufacturing capacities, including the production and export of value-added goods, so as to enhance growth and achieve prosperity.

Likewise, we urge that the forthcoming Ministerial Meeting of WTO to launch the next round of global negotiations on trade be one with a pronounced developmental dimension, with the aim of achieving better market access in agriculture, industrial products and services in a way that provides benefits to all members, particularly developing countries. The Round should be balanced in process, content and outcome.

We fully believe in the importance of upholding labour standards and protecting the environment. But these must be addressed in an appropriate way that does not, by linking them to trade liberalisation, end up effectively impeding free trade and causing injustice to developing countries.

We also call on the global community to establish innovative mechanisms to promote capital flows to a wider number of countries; and to urgently initiate reform of the international financial architecture to minimise financial instability and its impact on the poor.

We believe that the elimination of poverty is achievable – but only if we take determined and concerted action at national and international levels. We reiterate our commitment to work for a reversal of the decline in official development assistance flows. Urgent action is also required to tackle the unsustainable debt burden of developing countries, particularly the poorest, building on the recent initiatives agreed internationally. We believe such development assistance must be focused on human development, poverty reduction and on the development of capacities for participating in expanding world markets for goods and capital. Above all, we recognise the responsibilities of national governments to promote pro-poor policies and human development.

If the poor and the vulnerable are to be at the centre of development, the process must be participatory, in which they have a voice. We believe that the spread of democratic freedoms and good governance, and access

to education, training and health care are key to the expansion of human capabilities, and to the banishment of ignorance and prejudice. Recognising that good governance and economic progress are directly linked, we affirm our commitment to the pursuit of greater transparency, accountability, the rule of law and the elimination of corruption in all spheres of public life and in the private sector.

We are concerned at the vast gap between rich and poor in the ability to access the new technologies, at the concentration of the world’s research resources in market-driven products and processes, the increasing tendency to claim proprietary rights on traditional knowledge, and at bio- piracy. We call on the world community to use the opportunities offered by globalisation for adopting practical measures for overcoming these challenges; for example, by extending the benefits of global medical research through the provision of drugs at affordable prices to the poor in developing countries.

We welcome the spread of ideas, information and knowledge in building civil support for social equality, and in opposing all forms of discrimination and other injustices based on ethnicity, gender, race and religion. But, while better communications have increased human contact, there is for some a growing sense of social exclusion and a general failure of moral purpose. Persistence of inequalities faced by women, continued high levels of youth unemployment, lack of adequate support systems for the aged, children and the disabled in many parts of the world and increased threats to the

diversity of cultures and beliefs all contribute to the undermining of just and stable society. We therefore call for a renewed commitment to eliminate all forms of discrimination and to take measures that promote respect for the diverse languages, cultures and beliefs, and traditions of the world, which enrich all our lives.

Recognising that the full exploitation of the opportunities for development created by globalisation is not possible without security, political stability and peace, we commit ourselves, in partnership with civil society, to promote processes that help to prevent or resolve conflicts in a peaceful manner, support measures that help to stabilise post-conflict situations, and combat terrorism of all kinds.

Good governance requires inclusive and participatory processes at both national and international levels. We call on the global community to search for inclusive processes of multilateralism which give a more effective voice in the operations of international institutions to developing countries, and which recognise the particular vulnerabilities of small states.

We believe that the Commonwealth, an association of diverse sovereign nations reflecting different stages of development and united by common values, has a vital role to play in promoting consensus at national and international levels and in providing practical assistance for the creation of capacities needed to promote people-centred development. At the threshold of a new millennium, we look to the Commonwealth, and its family of organisations, to contribute significantly to making the above aspirations a reality.