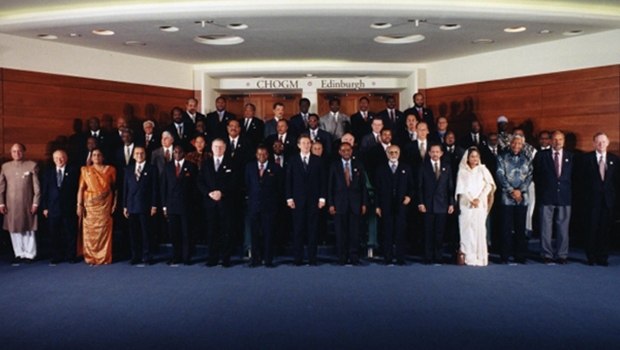 Today’s globalised world poses both opportunities and challenges. Expanding trade and investment flows, driven by new technologies and the spread of market forces, have emerged as engines of growth. At the same time, not all countries have benefited equally from the globalisation of the world economy, and a significant number are threatened with marginalisation. Globalisation therefore needs to be carefully managed to meet the risks inherent in the process.

We believe that world peace, security and social stability cannot be achieved in conditions of deep poverty and growing inequality. Special measures are needed to correct this, and in particular to help the integration of countries, especially small states and the Least Developed Countries, in the global economy and address the uneven development that threatens many countries. To redress these problems, we believe the following broad principled approaches should be pursued:

We also believe that commitment to market principles, openness to international trade and investment, the development of human and physical resources, gender equality, and good governance and political stability remain major components of economic and social progress; and that wealth creation requires partnerships between governments and the private sector. The Commonwealth, with its shared traditions and global reach, is uniquely placed to play a key role in promoting shared prosperity amongst its members.

We welcome the progress made in recent years in dismantling trade barriers and establishing a rule-based international trading system. However, significant barriers to trade in goods and services remain, and the benefits of the expansion of world trade are still unevenly shared. We have therefore resolved to:

Specifically we have decided to:

We welcome the recommendations of the first ever Commonwealth Business Forum held in London on 22-23 October 1997. We believe that the Forum can be an important link between the private and public sectors and foster vibrant private sector business links. It should continue to meet every two years. We are also arranging to set up a Business Council, under Lord Cairns and Mr Cyril Ramaphosa, made up of a small group of major private sector leaders from different regions of the Commonwealth, as well as other mechanisms, in consultation with the Commonwealth Secretary-General, to encourage greater private sector involvement in the promotion of trade and investment. In this context, we also agree to support and strengthen the work of the Commonwealth Partnership for Technology Management (CPTM).

We believe that investment flows can bring substantial benefits, and that sound macroeconomic policies and financial systems, strong regulatory and supervisory frameworks and political stability are essential in encouraging inward flows. At the same time, we

recognise that volatility in such flows can greatly complicate economic management. They also remain concentrated in a few regions and countries. We agree to:

Specifically we have decided to:

We welcome the improving growth prospects in many parts of the developing world, including evidence of recovery in Sub-Saharan Africa. At the same time, we remain concerned at the persistence of extreme poverty in many countries and the lack of capacity to reduce it. We have therefore agreed to:

We welcome the Report of the Chairman of the Commonwealth Ministerial Group on Small States and its recommendations for action based on the Commonwealth Report, A Future for Small States: Overcoming Vulnerability. In particular, we encourage international financial institutions to review their graduation policies, consider broader criteria covering the special vulnerabilities of their smaller members, and establish a task force to address the concerns of small states. We endorse the recommendation to set up a small ministerial group to discuss small states’ concerns with major multilateral agencies and to report to governments on the outcome as soon as possible.

We underscore the importance of good governance including increased openness in economic decision-making and the elimination of corruption through greater transparency, accountability and the application of the rule of law in economic, financial and other spheres of activity. We endorse the request by our Finance Ministers to the Commonwealth Secretary-General to establish an expert group to work on these issues.

We have a shared interest in protecting our environment, a global resource in which all countries have a stake. The costs of protecting it should be borne in accordance with shared and differentiated responsibilities. It is therefore incumbent on the global community to strengthen co-operation to achieve sustainable development, so that we can protect our planet for future generations. In particular, we look to a successful outcome at the Kyoto Conference of Parties to the UN Convention on Climate Change, involving realistic and achievable goals, significant reductions in greenhouse gas emissions and recognition that we all need to play a role.

We have therefore agreed to: