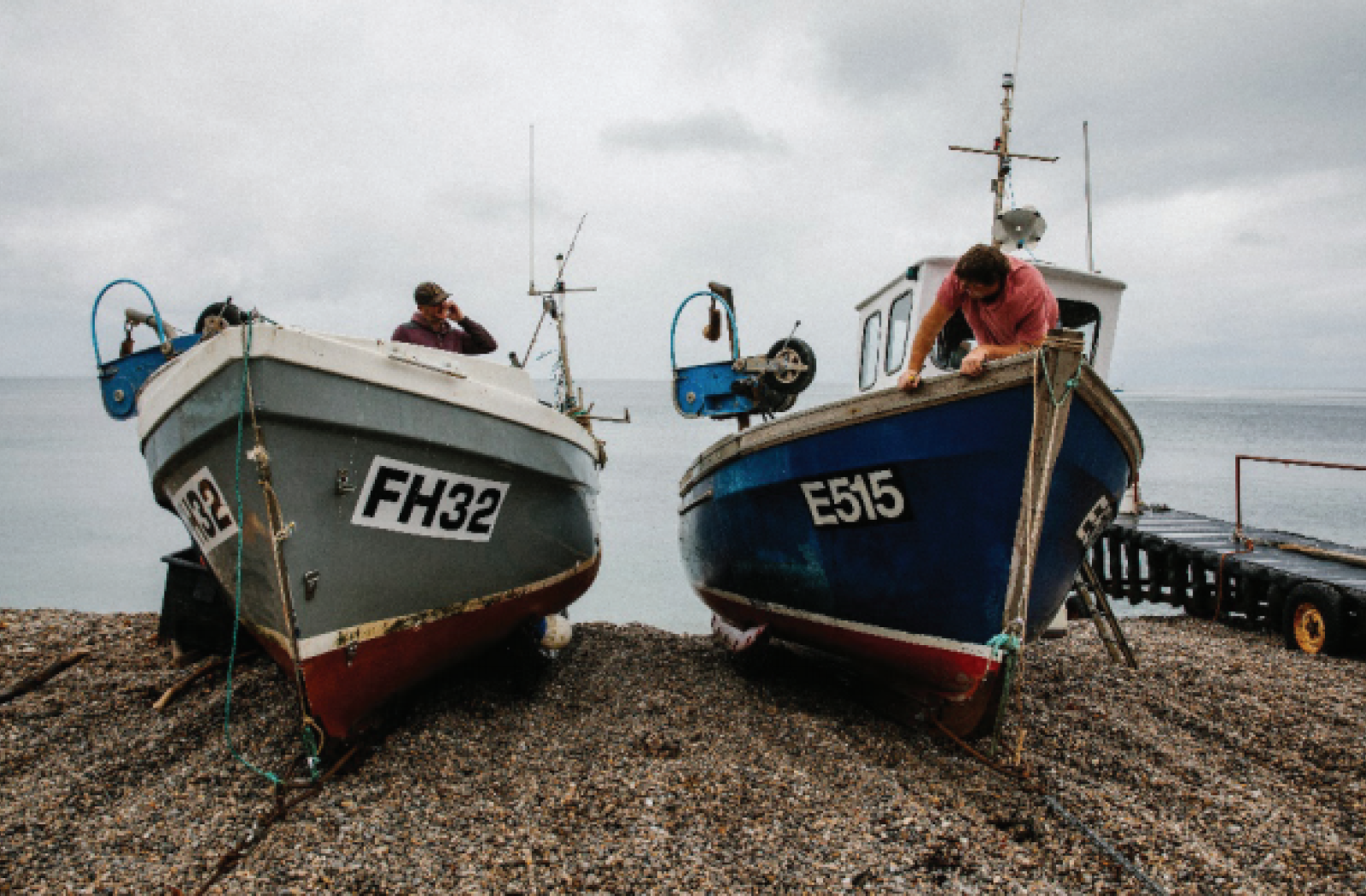 “The collaborative model has proved that not only can sustainable fishing co-exist with conservation,

but, indeed, that low-impact fishers can often be the most effective conservationists.”

Lyme Bay, on the south coast of England, is a biodiversity hotspot that supports an important inshore fishery, most especially for shellfish lobster, crab and scallop). It is also a significant area for conservation, containing important reef habitats that support a number of rare and threatened marine species. Following conflict between mobile gear fishers (primarily scallop dredgers) and static gear fishers (potting for lobsters and crabs) over access, and evidence of damage to some of its nature conservation importance, 206 km2 of Lyme Bay was permanently closed to mobile demersal fishing gear. A series of voluntary best practice management measures that the fishers could sign up to and also benefit from were agreed.

There is a Memorandum of Understanding to promote and implement best practice in fisheries and conservation management, and a voluntary Code of Conduct, which includes fitting of an Inshore Vessel Monitoring System and caps on the volume of fishing gear deployed by vessels within the reserve. A Code of Conduct for recreational fishers has also been agreed. The measures introduced have not only reduced further damage but also enabled seabed habitats to recover as well as supporting increased catches of shellfish. Studies show that the well-being and livelihoods of fishers directly involved in the project has also improved.

Lyme Bay is an open, relatively shallow bay on the south coast of Devon that has long been known as a marine biodiversity hotspot. The seabed is a mosaic of rocky and stony reefs overlaid in places with a thin layer of mud, sand or gravel. The reefs support many species, including nationally important seafans and solitary hard corals, as well as soft corals, and abundant fish and shellfish populations.

Fishers towing demersal fishing gear (otter trawls, beam trawls and scallop dredges) typically fished on the mixed sediment areas, and static gear fishers used pots on rocky areas to catch crab and lobster. Following the development of spring-loaded “rock-hopper” gear and in response to a lucrative market, scallop dredgers also started to fish across the rocky areas and reefs in the 1990s and early 2000s. This led to conflicts between the different groups of fishers, conservationists and SCUBA divers. The main issue raised was physical damage to the reef features and their associated marine life, but also some loss of static fishing gear. Regulators needed to address the multi-use nature of the area alongside conservation priorities.

In 2001, the main interested parties (fishers, conservation non-governmental organisations (NGOs) and a local fish producer organisation) agreed on two voluntary closed areas but this arrangement broke down after various factors, such as rising fuel costs and higher prices for scallops, contributed to more boats fishing in the area.

A statutory approach was taken in 2006 and expanded in 2008, with legislation passed to close a significant part of the bay, over the reef habitats, to mobile demersal gears.(1) This replaced the former voluntary closures covering a similar area. Further obligations came in 2011 when Lyme Bay and Torbay became a candidate Special Area of Conservation (SAC) under the EU Habitats and Species Directive; the site was formally designated a SAC in 2017.(2)

A consequence of the ban on the use of any mobile demersal gears was a significant increase in the use of static gear by fishers. This led to a new conflict over whether the increased level of potting, an activity requiring a permit but with no limit on the number of vessels that can apply for permits, was compatible with achieving the nature conservation objectives of the protected area. A Lyme Bay Working Group was set up in 2011 by a conservation NGO, the Blue Marine Foundation (BLUE), to address this question, and to develop a series of voluntary best practice management measures that the fishers could sign up to and also benefit from, in what became known as the Lyme Bay Fisheries and Conservation Reserve. This encompasses the Lyme Bay and Torbay SAC.

BLUE established the Lyme Bay Consultative Committee bringing together the stakeholders, set up working groups and provided momentum for the development of management measures.

A Memorandum of Understanding was agreed to promote and implement best practice in fisheries and conservation management and a voluntary Code of Conduct was developed, which includes fitting of an Inshore Vessel Monitoring System (real-time monitoring)(3) and caps on the volume of fishing gear deployed by vessels within the Reserve. A Code of Conduct for recreational fishers has also been agreed.

Voluntary marine reserves have a long history in
the UK. The first was set up around the island of
Lundy (Devon) in 1973, in response to concern
that there was no legal protection for this area of
marine nature conservation importance. These
sorts of reserves were typically supported by a
consultative/management group that agreed
on voluntary measures such as defining areas
where extractive activities such as commercial
and recreational fishing and collection of
marine curios should be prohibited. They were
innovative in having a more collaborative and
inclusive approach, an idea that is now standard
practice in statutory marine protected areas.
The main challenge has always been getting
support and acceptance by groups that may be
negatively affected, such as those involved in
excluded types of fishing. Consequently, while
such areas have laid much of the groundwork for
protection, formalising some of the agreements,
for example through local bylaws, provides
clarity and certainty for all concerned.

A “Reserve Seafood” brand has been established to promote and guarantee all the criteria that define the provenance of assured fish and the sustainable small scale inshore fishers who catch them. Together with provision of on-site facilities designed to optimise freshness and condition at the market, such produce can be sold at a premium.

Other activities include the development of new markets and branding, investment in post-harvest icing infrastructure and knowledge-sharing and training, including a school outreach programme working with fishing ambassadors to engage young people and local communities.

The Lyme Bay Consultative Committee is chaired by BLUE. Most of its members are local fishers; there are also representatives of the Devon & Severn and the Southern Inshore Fisheries and Conservation Authorities, the Marine Management Organisation, Natural England, Dorset County Council, Devon County Council and the Sea Angling Trust, as well as scientists from Plymouth University. Other organisations (e.g. fish merchants and agents, charities) provide advice and expertise. The Memorandum of Understanding and the voluntary Code of Conduct is supported by fishers that use a wide range of different gears, as well as by regulators and BLUE.

Monitoring of fish stocks and the reefs is carried out by scientists from the University of Plymouth in partnership with fishers and the Devon & Severn and the Southern Inshore Fisheries and Conservation Authorities.

Seed funding of around £60,000 was provided by Marks & Spencer through BLUE. These and other partners from the private sector continue to provide some financial support, as do the UK government and the EU.

The measures introduced achieved the project’s objectives of preventing further damage to the reef habitats and indeed enabling some recovery, at the same time as resolving conflicts between the two types of fishers and promoting sustainable, premium quality, provenance-assured seafood from Lyme Bay.

In addition, over the period 2008-2016, there was a four-fold increase in the number of reef species, and, between 2013 and 2017, a doubling of scallop landings, a quadrupling of juvenile lobsters and 250 per cent increase in landings of brown crabs.

The well-being and livelihoods of fishers directly involved in the project have also improved. For example, measures such as installing chiller units in ports to maintain fresh catches and the development of Reserve Seafood to sell sustainably sourced fish and shellfish at a premium have both been very successful and popular with the local fishers involved. Job and income satisfaction of fishers involved with the Reserve activities has been high, and has gradually increased, showing that there have been both environmental and socioeconomic improvements.

The approach taken at Lyme Bay is being explored as a model for sustainable coastal fisheries management in other parts of the UK and elsewhere. In 2019, the BLUE project brought together artisanal fishers from Europe and Lyme fishers to exchange knowledge, skills and stories and discuss the future of low-impact, sustainable fishing. Feedback from Lyme fishers was extremely positive, with some asking to take part in further exchanges.

The main challenges centre around engaging and building trust with stakeholders, especially those whose livelihoods are affected by the management measures. For example, not all fishers have signed the Memorandum of Understanding, particularly those who operate large boats or towed gears that are prohibited in the Reserve and therefore see no direct benefits. The approach taken is to keep communication open, offer to create a code for larger vessels and find projects that may be mutually advantageous.

The status of the management measures, as they currently stand, also presents a challenge. The Code of Conduct, which limits pots and nets to agreed levels, is voluntary; it is supported by and largely adhered to by local boats but is not enshrined in law. Consequently, there is no constraint on vessels that choose to ignore it. This has been a particular concern because of interest from fishers from further afield who are attracted to fish in the area because of its improving stocks, even if they cannot market their fish under the Reserve Seafood brand. A related issue is that, while there are voluntary agreed limits on the number of pots that can be deployed, there is no limit on the number of vessels that operate in the Reserve.

Continuity and ensuring that the collaboration between fishers, conservationists, scientists and regulators can carry on in the long term are also challenges. One aspect of this relates to financing the management, projects and initiatives that stakeholders wish to undertake. Seed funding started the process, and a variety of partners and stakeholders make financial contributions, but it is not self-financing.

A voluntary approach to managing sustainable fisheries can be used to bring people together and find solutions that are good for fisheries and the environment. However, in the longer term, statutory backing for agreed measures is key to ensuring compliance and clarity. This is being advocated by the Consultative Committee and has widespread support, but has still to be taken forward by the regulators (the Inshore Fisheries and Conservation Authorities).

The marine protected area and conflicts around it over fisheries management brought things to a head but at the same time created the momentum for change. The principles and approach taken in Lyme Bay, such as the active involvement of stakeholders, the support of regulators and government agencies, financial support, promotion and education, can be applied in other locations, both within and outside areas of nature conservation importance.

Careful consideration needs to be given to the approach and level of financing to support such initiatives. Funding needs to be sufficient to make it work but at a level where partners have buy-in, and where there is a view to make it self-financing in the future.

If the work of the Lyme Bay Consultative Committee is to continue in the long term both locally and as a model for elsewhere, it is important to ensure that the lessons learnt are acted on, and that the stakeholders themselves become advocates for the approach.