Case study: Lessons From the Restoration of a Mangrove System in Point Lisas, Trinidad and Tobago 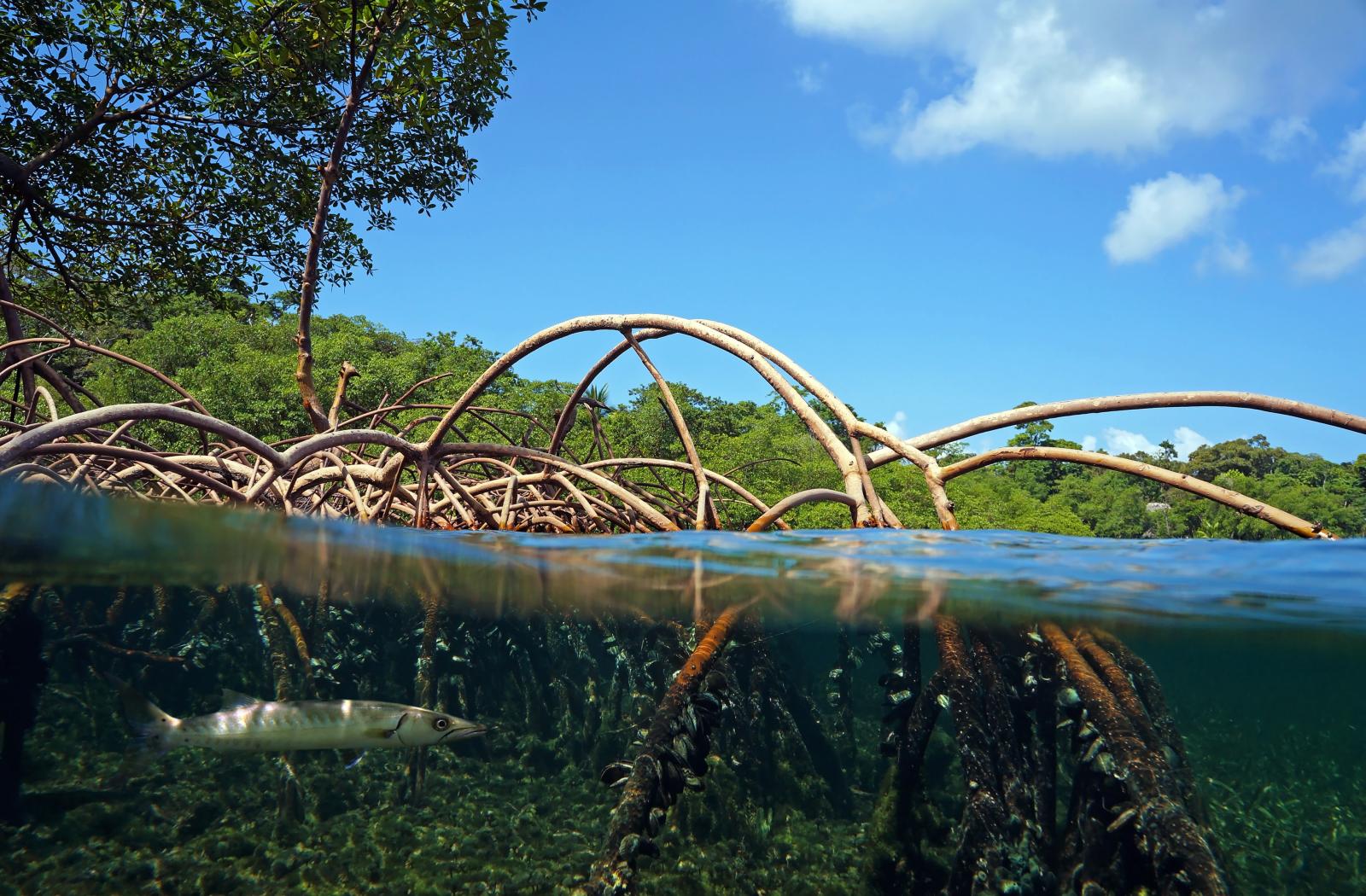 “Once you recreate the natural hydrological environment and there is a source of seedlings, natural mangrove regeneration will occur.” Dr Rahanna Juman, Director (Acting), Institute of Marine Affairs, Trinidad and Tobago

Significant impacts on the mangroves in Trinidad and Tobago date back to the 1780s, when the St Ann’s River was diverted and wetlands were reclaimed to expand the city of Port of Spain. Development of roads, housing, industries and other infrastructure along the coast has contributed to the decline of the mangrove forest. For instance, in 1979, approximately 500 ha of forest from Couva to north of Claxton Bay were reclaimed for the construction of the Point Lisas Industrial Park and DeepWater Port.

Since 2001, Trinidad and Tobago has had in place a National Policy and Programmes on Wetland Conservation. This includes the concept of “no net loss” of wetlands, their values and their functions on publicly owned lands and waters, and requires mitigation action where mangroves have been removed or adversely affected as a result of development works.

This case study shares the experience of a restoration project in the vicinity of Point Lisas Industrial Park, initiated in 1999. A historic case study is useful to show how a situation has played out – giving the benefit of hindsight to draw lessons. This example shows that the key success factor for this mangrove restoration project was not the planting but rather the restoration of the hydrology in the area to create the right conditions for natural colonisation and recovery.

Point Lisas, on the west coast of Trinidad, was developed in the late 1970s as a deep-water port and industrial park. The west coast is where the majority of mangrove forests are to be found; it is also where more than 70 per cent of the population reside and has experienced the most intense development.

In the late 1990s, the ammonia industry had cleared a 1200 m2 area of fringing mangrove forest to enable the placement of a pipeline to carry waste-water into the Gulf of Paria.

It was expected that the mangrove forest would regenerate naturally as seedlings were available from the adjoining wetlands.

After 18 months, however, the mangrove showed no sign of regeneration.

Given the national policy for no-net loss of mangrove ecosystems, action was taken to investigate the reasons for the lack of regeneration and to attempt restoration.

In 1999, a replanting project was undertaken to recover the mangroves at Point Lisas cleared during the construction of the pipeline.

During the laying of the pipeline, marl used to the cover the pipeline was unevenly placed, altering the topography of the area and restricting tidal flow. To restore the natural topography, profiles were taken in the cleared area, and were compared with the adjoining mangrove forest. From these profiles, the amount of material to be excavated to restore the topography and to re-establish the tidal hydrology was determined.

Before replanting, the topography was restored by removing the overburden to re-establish the tidal flushing; this allows the area to be flooded by the high tide.

Following these works, and once it was established that the area was being flooded by the tide, 261 seedlings of three species of mangrove were planted – 170 red (Rhizophora mangle), 76 black (Avicennia germinans) and 15 white (Laguncularia mangle).

The long-term monitoring of this project has enabled observation of the site’s response over time.

The Institute of Marine Affairs, a government-funded research institute, was commissioned in 1999 by the ammonia plant that had laid the pipeline to restore the cleared mangrove area. The project was conducted jointly as a public-private partnership, with funding provided by the private company. Monitoring of this mangrove forest west of the plant still continues up to today.

After 10 months, the number of seedlings recorded had increased to 354 – 82 per cent of which were natural colonisers. Only 24 per cent of the transplants were recorded.

By 2003, the tree density was 30 trees per 0.01 ha, with tree height between 6 and 8 m. Shortly after 2003, the area suffered mangrove die back disease, but by 2006 there had been another period of regrowth, with the tree density returning to 13 trees per 0.01 ha and an average height of almost 10 m. There have been subsequent periods of die back and regrowth in the restoration area as a result of disease and infestation. However, there has not been any further replanting since 1999 and so the system appears quite resilient.

The restoration project in 1999 was considered a success; however, the planting of mangrove seedlings proved not necessary once the physical characteristics of the site had been restored. Without reconstruction of the gradient and tidal hydrology, the replanting would have failed to re-establish mangroves in this area.

The main challenge was to determine why natural regeneration had not occurred as had been expected, given the plentiful supply of seedlings in the adjoining wetland areas.

The approach taken to conduct scientific surveys to determine what may have changed in the physical environment proved successful. This supports the need for evidence (scientific)-based decision-making.

Juman, R.A. (2013) ‘Restoration of a Mangrove System in Point Lisas, Trinidad and Tobago’. Presented to the 1st Mangrove Forum, Guyana.