Case study: Katy Soapi – A Leader in Ocean Science and Conservation in Fiji and the Solomon Islands 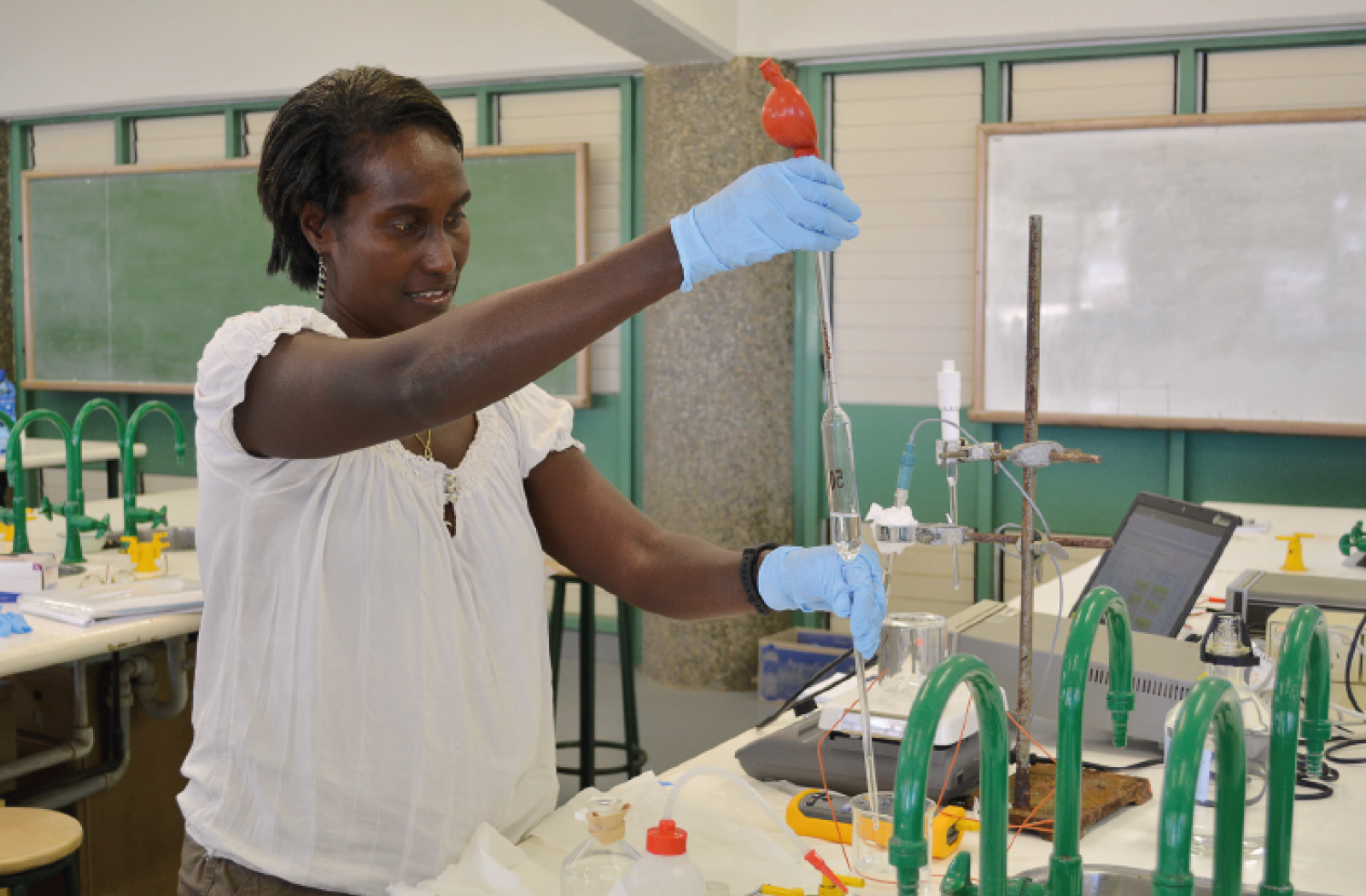 “We need to start changing what our young people think of when they think of a scientist. My hope is that I see more Pacific Islanders, and women, taking up leadership roles, being successful in their career and thriving.”

She completed her bachelor’s degree at the USP, a master’s at the University of Sydney in Australia and a PhD at the UK’s University of East Anglia. Soapi then returned to the Pacific, taking up a position at the USP as a lecturer and eventually becoming the Manager of the Pacific Natural Products Research Centre, housed at the USP.

In the Solomon Islands, Soapi is a founding member and board member of the Tetepare Descendants’ Association, which is dedicated to conserving the largest uninhabited island in the Southern Hemisphere. As part of that work, she supports a seagrass monitoring programme that is led and conducted by women. For the past ten years, the programme has been gathering annual data on seagrass coverage, diversity and health, all of which are ecosystem health indicators for the island’s lagoons.

Soapi is also part of the advisory team to the Office of the Pacific Ocean Commissioner (OPOC) supporting Pacific Island Countries on the marine genetic resources component of the UN Marine Biodiversity of Areas Beyond National Jurisdiction (BBNJ) negotiations (an international instrument under the UN Convention on the Law of the Sea, the BBNJ, once finalised, will address the management of marine biological diversity of ocean areas beyond countries’ ocean borders).

Soapi attributes her success to good mentors and seeking out and pursuing opportunities. Having grown up in a matrilineal culture, Soapi has always felt her voice is important in her community. Even away from her coastal village, she says that a sense of empowerment has stayed with her.

What is your background and the path that led you to where you are today?

I grew up on a small island called Rendova. My village was right by the sea, so I grew up by the sea. My primary education was on that island in the village. Later, I went to boarding school on another island for high school.

After completing high school, I went to the USP to do a bachelor’s degree in chemistry. I decided upon further studies at the University of Sydney in Australia on chemistry. I wanted to investigate the natural products from medicinal plants, such as plants that were used traditionally in my village, that I grew up using as a child. I wanted to look at the links between traditional medicine and bioactive natural products isolated from the medicinal plants.

However, when I got to the University of Sydney, it was hard to get the plants that I wanted to work on from the Solomons, so I changed my course and studied synthetic chemistry instead. My study involved working towards the synthesis of a natural product called Phomopsin which has anticancer properties. I continued my research in synthetic chemistry studies, enrolling in a PhD program at the University of East Anglia, when my family moved to the UK. I was successful in receiving a scholarship to study nitrogen-containing biologically active compounds.

At the end of my PhD, I returned to Fiji with my husband who had found a job there. I went to visit some of my old professors at USP. One of them, the late Professor Aalbersberg, who I had worked with previously as an undergraduate encouraged me to apply for a position as a research fellow in a project on marine natural products in Fiji and the Solomon Islands. I applied and got the position.

After about a year, I got a job as a lecturer in chemistry, and eventually as Manager of the Pacific Natural Products Research Centre. I was at the USP for almost 13 years teaching and later, leading the research efforts of the Centre investigating antibacterial, antifungal and anti-cancer properties of marine natural products from marine invertebrates, algae, soft corals and bacteria in sediments.

In January 2021, I joined The Pacific Community (SPC) as Coordinator for PCCOS. It’s a new role and I am really excited about this new challenge and the opportunity to work for and with our members states within the ocean space.

What has been your impact on gender equity in your field and region?

At the community level, I am engaged with one of our conservation projects, the Tetepare Descendants’ Association, which has been on-going for almost 14 years. It is a project where we’ve conserved one of our islands and tried to sustainably use and manage our island’s resources through monitoring efforts to inform decisions. We have set aside the seagrass monitoring especially for the women. 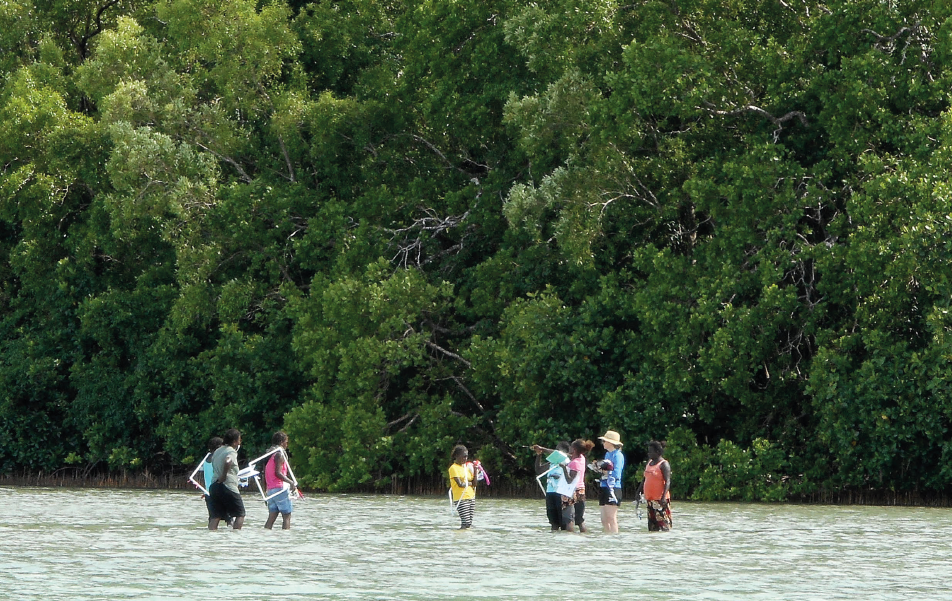 For seagrass monitoring it was easier for the women because they are already involved in artisanal fishing and often spend time on the reef or mudflats to collect shellfish for food. The women were quite keen on being part of the monitoring activities and it was quite an appropriate activity for them, being in shallower areas and sometimes involving their children. I have done it many times dragging along all my kids. I am glad that this activity was set aside for women because being in their own space, they were free to lead the monitoring activities and to participate fully.

How did you support the marine genetic resources component of the BBNJ negotiations?

One of the key elements in the BBNJ instrument is marine genetic resources. When the negotiators from New York came to Fiji, we were able to present our work to them and talk about what is meant by marine genetic resources, the importance of drug discovery and pharmaceuticals. They also visited our labs to see our collection and our testing facilities. We tried to show them the whole process from extraction to testing and purification of bioactive compounds including how and to whom we send our samples. We wanted to ensure that they have a good understanding of the research and development processes involved in biodiscovery and pharmaceutical research to help them with their BBNJ negotiations.

What do women in your region need to become ocean leaders?

In the Pacific, where there is such a strong family network, often it is the female who must drop out to look after a parent or the wife who must drop out to look after the children. We need to raise more awareness that women do not have to do that. I think that more should be done to create an enabling environment for women to continue working and to not have to choose between a career and a family.

I think we are getting more marine science graduates in the Pacific now, but getting a job in marine science is very hard. Most of them end up as teachers or in a non-marine science job. This affects both men and women, but I think it is worse for women. If recruitment for a science job is between a female and a male candidate, often it is the man who gets selected. There is also a lack of funding, for women and men, to participate in ocean science projects and ocean science employment.

One of the barriers is not having enough women scientists to look up to. Sometimes it is hard to imagine where and what you can be when you do not have that image of a woman you want to aspire to. Female role models help overcome those barriers, so you do not have that feeling of being an imposter because there is no one around you who is like you, who is doing the same kind of work that you are doing.

What allowed you to succeed despite the barriers?

I also had good mentors and a partner who encouraged and believed in me. The late Professor Aalberberg was one of those mentors who gave me a chance. When I was a student at USP, I assisted him on a research project for six months and it was an amazing experience that really opened my eyes to research work which I was so grateful for. When I returned to Fiji after finishing my PhD, I again worked with him and had another opportunity to learn from him.

At the community level, despite the barriers we face as women, I find strength in culture. I grew up in a matrilineal system and heard stories of fierce tribal women who made decisions about the land and settled disputes. I also grew up observing the strong voices of my mother, my aunties and grandmother. Sadly, in our modern society, women’s voices are not as elevated anymore. But I ride on the recognition my culture gives my voice and I find it empowering. I am often consulted on matters relating to our tribal land or our conservation projects back at home and I am grateful for that. Solomon Islands is so diverse culturally, and I am painfully aware that the voices of women are often overlooked or ignored even now in my own community as society, culture and lifestyle change.

My mother has always been my biggest supporter, always encouraging me. She was a school teacher. She said to me, “Go as far as you can.” Even after I finished university, she said, “I’ll leave it to you to decide when you want to stop studying.” She encouraged me to go after what I wanted and supported me as much as possible financially. Having somebody who believed in me and encouraged me has been quite influential in my career.

Advice for the next generation

The other advice is to not give up easily. Always remember that if it were easy, somebody would have done it already. I was the first in my family to go to university and it was not by luck that I ended up there. It was through hard work and perseverance that I progressed through my studies and my career. STEM is hard for everybody and there were many, many times I wanted to give up, but I kept going. It was all worth it in the end.

We do have a good number of women scientists but there’s not enough networking. We need to work together to provide a platform for women to learn from each other. For small communities, like those found in the Pacific, it is important for women to maintain their networks. You need these networks as you progress in your career and they can become your support system during tough times or when you need career advice or just to connect and share experiences in a safe space.

You can influence the world, wherever you are along your path. A lot of young people think that they need to be a leader to influence others. It is important to start where you are. You can learn so much and be a positive influence even through volunteer work. My community engagements are all voluntary work. I enjoyed the opportunity to experience conservation work while at the same time participating in community science. The work has kept me grounded and connected to my community even from abroad.

Hopes for the future

I hope to see more Pacific Islanders, if not Pacific women, in positions of leadership. We need role models for the younger generation. We need to learn, hear and see what our Pacific Island women are doing and their contributions to science and development so our young people can see themselves in these leaders. My hope is that we have more Pacific women in leadership whom our young people can look up to.