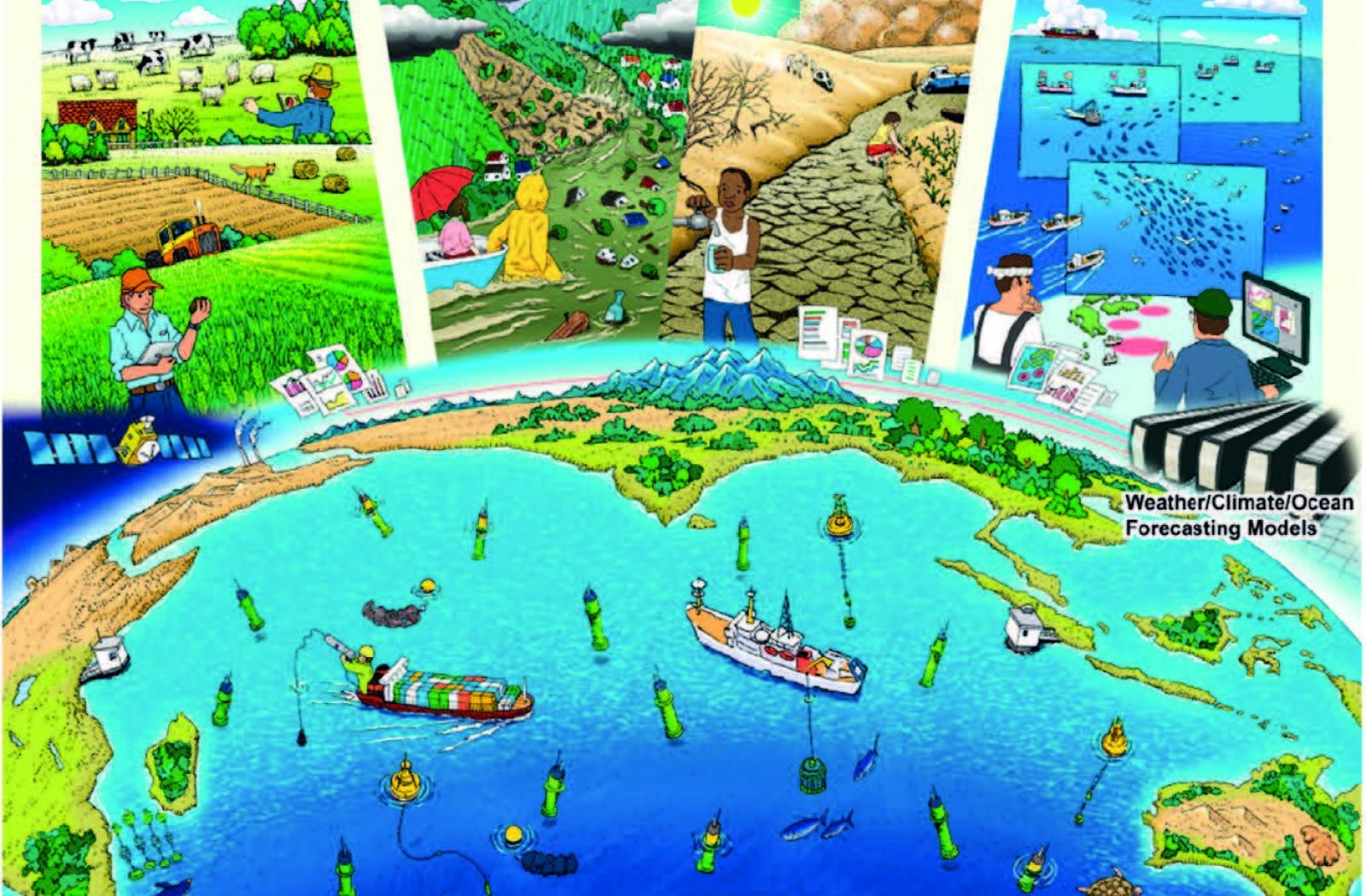 “The Indian monsoon and its vagaries are tightly linked to the changing environmental conditions in the Indian Ocean. Hence high-resolution ocean observations can help improve our monsoon forecasts. In terms of cyclones, forecasting has improved a lot. The India Meteorological Department can now predict the genesis, track and landfall of cyclones with greater accuracy, so that we are able to save many lives, from tens of thousands of casualties in the 1990s to tens of hundreds by 2020.”

The Indian Ocean Observing System (IndOOS), established in 2006, is a network of interdependent and complementary instruments deployed in the Indian Ocean for measuring seawater temperature, salinity, ocean currents, atmospheric humidity and wind. Originally set up to better understand and forecast the onset of the seasonal monsoon, it now serves to enable the modelling of future climate scenarios under climate change and to predict extreme weather events – such as floods, droughts and cyclones – at a regional scale. Such predictions can help prepare for and mitigate the worst effects of extreme weather on vulnerable communities across the Indian Ocean and beyond. Continued financial support for maintaining the existing network of instruments and to expand its reach into new areas to improve the system’s prediction ability is necessary and would be enhanced by the establishment of more partnerships in the region as well as political will to allow observational access to the exclusive economic zones (EEZs) of coastal states. Training of personnel at a local level to deploy and maintain the instruments, as well as to analyse the measurements, is also addressed by IndOOS. Improved coordination of all activities that utilise the recorded observations, as well as the continuing development of data recording, calibration and management standards, should improve the system’s capacity to inform science and be of use to Indian Ocean communities into the future.

The Indian Ocean basin is surrounded by 22 countries – home to almost one third of humankind – many of which are vulnerable to extreme weather events and climate change. These countries rely heavily on fisheries and rain-dependent agriculture, both tightly linked to the monsoon, which is itself driven by dynamic temperature gradients across the Indian Ocean. Variations in ocean surface temperature have been shown to influence monsoon rains across the basin, flooding in East Africa, droughts and wildfires in Australia and Indonesia, changes in upwelling intensity and even sea level rise. Associated shifts in water oxygenation, salinity and nutrient levels also influence marine productivity and ecosystem stability as a whole. Disruption of ecosystem stability on this scale is predicted to increase the number of undernourished people in the region by 50 per cent by 2030.

The Indian Ocean’s influence extends beyond its boundaries, redistributing heat across the planet and modulating the climate in the Pacific, North Atlantic and Mediterranean Sea.

Regular observations of different ocean attributes over the entire Indian Ocean are the key to informing and improving our understanding of how the climate works and varies over time. Mathematical models that use data from such observations to simulate future climate conditions can be used to forecast the timing and intensity of the monsoon or extreme weather events, which in turn can help mitigate any potential damage to crops and livelihoods.

The goal of the Indian Ocean Observing System (IndOOS) is to provide sustained, high quality oceanographic and marine meteorological measurements to support knowledge-based decision-making through improved scientific understanding, weather and climate forecasts and environmental assessments for the benefit of society. Its objectives are to foster agreements and partnerships among Indian Ocean countries and beyond, creating opportunities for them to enhance long-term monitoring and forecasting capacity.

IndOOS emerged from discussions among scientists at the First International Conference on the Ocean Observing System for Climate (OceanObs) in 1999, a time of new and advancing observing technologies, such as profiling floats (Argo), satellite missions and surface meteorological buoys. Based on scientific and societal needs, an implementation plan for IndOOS was put together by the Indian Ocean Panel (now the Indian Ocean Regional Panel) in 2006, established under the Climate and Ocean Variability, Predictability, and Change (CLIVAR) and Intergovernmental Oceanographic Commission – Global Ocean Observing System (IOC-GOOS) programmes.

Since its inception, the CLIVAR/IOC-GOOS Indian Ocean Region Panel has provided scientific and technical oversight for implementation of IndOOS and coordinated research on the role of the Indian Ocean in the climate system. Members of the Panel currently include representatives of research institutions from Australia, China, Germany, India, Indonesia, Japan, Kuwait, Mozambique, Norway, Republic of Korea, South Africa, the United Kingdom and the United States.

Funding for the development and continuation of IndOOS is the responsibility of the Indian Ocean Resources Forum (IRF), following the business plan devised by the Panel at its inception. The IRF works year-round to facilitate and coordinate the provision of the resources required for the implementation of IndOOS, promoting contributions from international aid and development agencies as well as from institutions in participating countries. The IRF also monitors and critiques the rationale for implementation of IndOOS as articulated by the Panel and other relevant expert bodies. 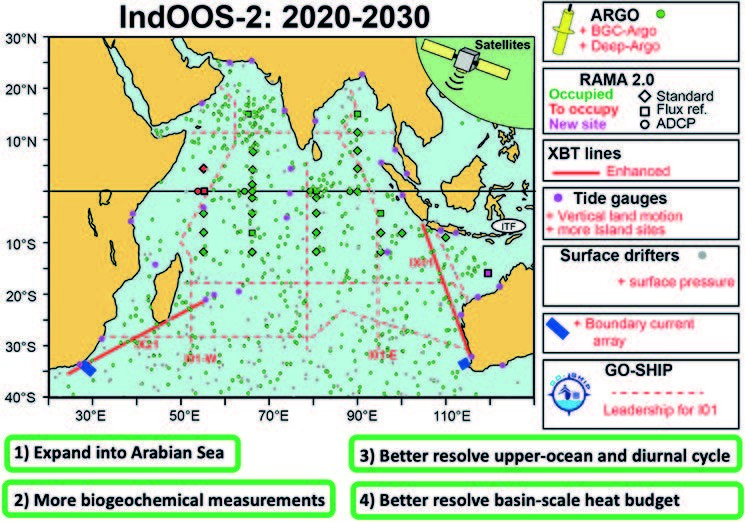 To date, IndOOS has provided unprecedented measurements of weather, ocean and climate phenomena. These observations have, for instance:

In addition, approximately 20 capacity development workshops have been held across the region to ensure broad understanding of the social and economic applications and benefits of IndOOS, as well as technological training in the sustainment of these vital meteorological and oceanic observations.

Examples of capacity development programmes include:

A review of IndOOS’s performance was completed in 2019, addressing the way societal and scientific priorities and measurement technologies have evolved, especially considering the accelerating pace of climatic and oceanic change. The review has provided a roadmap to sustained observations of the Indian Ocean up to 2030.

Aside from logistical challenges presented by maintaining unattended equipment at sea (e.g., piracy, vandalism, ship time for servicing), a major challenge of the IndOOS programme has been to gain authorisation from coastal states to extend the observation network into their EEZs. Access to these waters would enable the study of important coastal, shelf and slope systems that are integral to sustaining fisheries and to understanding the entire basin. Installing and testing new observing platforms within EEZs, together with building trust, national capacity and resource sharing across state boundaries, may help address this challenge.

Ensuring the quality, accuracy and compatibility of data across all ocean observation programmes is an ongoing universal challenge, addressed by the creation of best practices for instrument calibration, data recording, integration, reporting and quality control, as well as regular provision of national and regional training workshops.

Another significant challenge is the flat or declining levels of national funding for sustained ocean observation networks. Ongoing commitment to IndOOS by the Intergovernmental Oceanographic Commission, the World Meteorological Organization and the International Science Council through their support of the World Climate Research Program is essential. Importantly, improvements and enhancements to the system require increased participation by countries and institutions willing to provide resources.