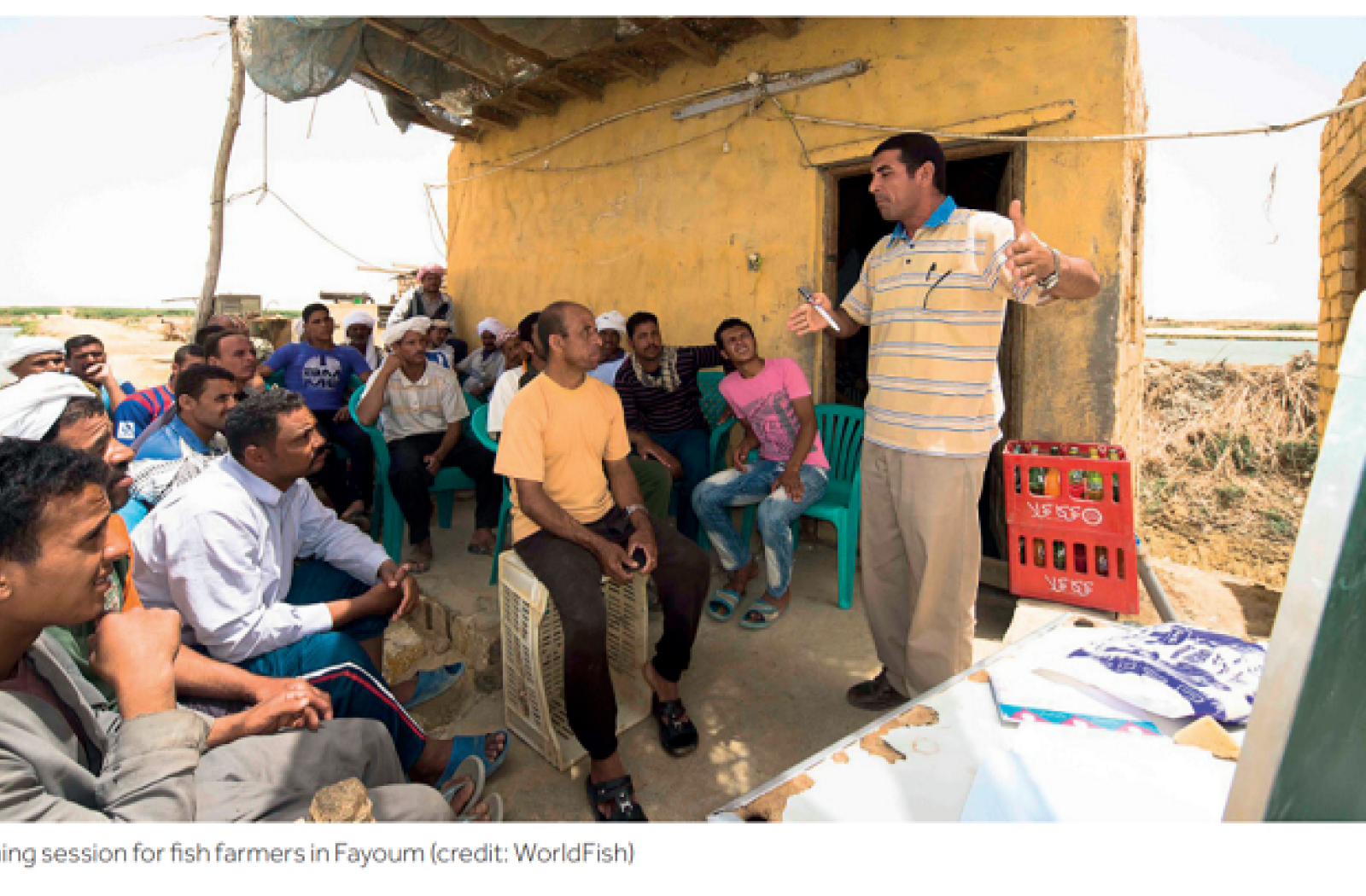 “What I have learned from the training is very useful: how to prepare the land, how to handle fingerlings, how to calculate the required amount of food and how to measure water quality. I have noticed better weight of fish and increased survival. These results will help to give my family a better livelihood,” says Abdel-Wahab, Egyptian fish farmer

The Egyptian aquaculture sector has grown rapidly since the 1980s into a strategically important source of nutrition for the country’s population. The fish farming system had not changed much since the initial establishment of pond-based fish farming zones except that there was increasing dependence on feeds. The 2011 Arab Spring revolution resulted in a downturn in the Egyptian economy that threatened the profitability of fish farms. Selling prices for fish were static or declining while costs continued to increase.

A study commissioned by the Swiss Agency for Cooperation and Development (SDC) in 2011 identified opportunities to improve the situation through best management practice (BMP) training and the release of a faster-growing strain of tilapia developed by WorldFish at its Abbassa research centre over the previous decade. This resulted in WorldFish implementing a three-year SDC-funded project, Improving Employment and Income through the Development of Egypt’s Aquaculture Sector, from early 2012.

The project trained over 2,400 fish farmers in BMP in a field-based programme delivered by private sector, locally based trainers. This resulted in high adoption rates and significantly improved feed efficiency that generated average increased profits of US$16,000 per farm and total value added by the project of US$27 million. Increased feed efficiency also resulted in environmental benefits from reduced greenhouse gas emissions and reduced discharge of nutrients to ecosystems.

Egyptian aquaculture is based on small- to medium-scale pond-based fish farms covering around 120,000 hectares in designated aquaculture zones, mainly on the southern edge of shallow lakes along the north coast of the Nile Delta. The current system was established in the early 1980s when aquaculture was prioritised as an important sector for development. A management and regulatory organisation, the General Authority for Fisheries Resources Development (GAFRD), was established that leased aquaculture land to the fish farmers in small blocks. Government-owned feed mills and hatcheries were built and, because aquaculture was profitable, the sector expanded rapidly through private sector investment. Aquaculture production rose to almost 1 million tons per year by 2010, almost all consumed locally, making it a strategically important source of nutrition and resulting in Egypt becoming the largest aquaculture producing country in Africa and the Near East. However, this success was threatened by the Arab Spring revolution in 2011, which slowed the economy, making it difficult for fish farmers to pass on rising input costs. Many fish farmers were unable to make profits using the tilapia and mullet farming systems they had developed since the 1980s, and it seemed unlikely that aquaculture production could continue to thrive.

The international research organisation, WorldFish (formerly the International Center for Living Aquatic Resources Management and WorldFish Center) has had an office and research centre in Egypt since 1997. Meanwhile, the Swiss Agency for Development and Cooperation (SDC) indicated that it would be keen to support a project focused on increasing employment following the Arab Spring. SDC supported a 2011 scoping study that identified a need to improve management practices in the aquaculture sector as well as releasing an improved strain of tilapia to Egyptian fish farmers and providing support for women fish retailers.

The new three-year US$6 million project, Improving Employment and Income through the Development of Egypt’s Aquaculture Sector (IEIDEAS), began in 2012. One of the first actions was to set up a best management practices (BMP) training programme by involving key stakeholders in its design and implementation. Representatives from across the main aquaculture zones were brought together to develop BMP guidelines, based on blending current Egyptian aquaculture practices, which varied in different aquaculture zones, and international best practice programmes such as GlobalGAP and Aquaculture Stewardship Council certification schemes. The local experts then helped develop BMP training modules: short, field-based training sessions on the key topics, each containing a practical demonstration and delivered using simple materials such as posters, flipcharts and readily available tools. This was followed by training of trainers, again involving the local experts, as well as additional private sector trainers, who delivered the training to fish farmers in their own fish farming areas. Trainers were paid a small fee for delivery of each training module to a small group of up to 20 fish farmers. Around 10 training modules might be delivered at the appropriate time of year in 3 or 4 sessions, each session covering 2–4 training modules.

The IEIDEAS project was funded by SDC and implemented by WorldFish as part of its Egypt research programme and its global aquaculture programme. It involved staff from the Egyptian Government, particularly from GAFRD and the Central Laboratory for Aquaculture Research (CLAR), which seconds several staff to WorldFish. On-the-ground support also came from the Fish Farming Associations and the apex organisation, the Aquatic Union of Fisheries Cooperatives, as well as some of the main private sector fish feed companies, including Skretting and Aller Aqua.

Over a three-year period, the IEIDEAS project provided BMP training to around 2,400 fish farmers and the faster-growing strain of Nile tilapia (Abbassa improved strain) reached around 500 fish farms.

The quantitative results were assessed in 2015, through field-based surveys including a BMP adoption survey, to determine whether fish farmers had applied the recommended practices, and a fish farm and farmer impact assessment survey.

The project resulted in greatly increased profitability for fish farms equivalent to around US$16,000 in extra profit generated per farm and US$27 million total value added by the project. Increased profitability was mainly achieved by cost savings through more efficient feed management rather than increased production. Average Food Conversion Ratios (FCR = amount of food fed divided by fish weight gain) fell from around 1.8:1 for control farmers to below 1.5:1 for farms that received BMP training. Reduced FCRs will have resulted in reduced environmental impacts (greenhouse gas emissions and nutrient discharges).

Although profitability of fish farms improved, the directly attributable employment increase from farmers who received assistance from the project was only 28 fulltime equivalent (FTE), well short of the project target of 10,000 new jobs.

The pre-project study had established that there were 14 FTE jobs along the aquaculture value chain for each 100 tons per year of production, and total employment in the value chain of around 100,000. If fish farmers increased their production by around 10 per cent as a result of the project, employment should increase by around 10,000 FTE. SDC saw increased employment as a critical objective of its economic strategy in Egypt after the Arab Spring.

The IEIDEAS project included not only BMP training but also the release of a faster-growing tilapia strain and expansion of aquaculture into a region of Upper Egypt. However, the dissemination process for the improved strain of tilapia meant that it was only in the final year of the project that it reached significant numbers of farmers, and aquaculture production in Upper Egypt effectively started from zero, so these interventions did not contribute toward production increases during the project’s lifetime. Meanwhile, faced with increased input costs and a stagnating market, the fish farmers behaved logically by using the BMP training to greatly increase their efficiency, reducing their feed use but maintaining production levels and increasing their profitability rather than increasing risk by producing more fish.

Official statistics show that aquaculture production increased rapidly across the country over this period but there is a question of attribution. Official statistics are based on productivity estimates for the main fish farming areas rather than farm-by-farm data collection, whereas the project inception and completion reports were based on field surveys covering statistically representative numbers of fish farmers. It was clear that fish farmers were applying the new practices and benefiting from this immediately in terms of profitability. However, it was proposed that the target was still likely to be met in the longer term as a result of project interventions as the use of the faster-growing tilapia strain expanded and farmers invested their profits from improved practices in production intensification.

The Egyptian aquaculture industry also faced a new fish health challenge over this period, called Summer Mortality of Tilapia, leading to many farmers losing a significant proportion of their fish during the hottest part of the year. WorldFish research found a potential link between Summer Mortality and the spread of Tilapia Lake Virus; however, this has not been confirmed.

This is a good example of a project being driven by donor priorities – in this case employment. An apparently logical strategy was constructed around the link between production and employment. However, for fish farmers, the central issue was their economic survival in very challenging circumstances. This emphasises the importance of understanding the priorities of key stakeholders during project design and setting achievable targets.

Filed-based BMP training can have very significant impacts on the financial performance of small- to medium-scale fish farmers.

The BMP training allowed farmers to significantly improve the efficiency of feed use, producing similar amounts of fish compared with before the BMP training but using less feed.

The main messages from BMP training were adopted immediately and applied by the majority of fish farmers. The training was delivered mainly by locally based fellow fish farmers rather than extension staff, which probably increased the rate of adoption.

The parallel intervention of releasing an improved strain of tilapia took much longer to implement and achieve impacts than the BMP training.